Yesterday around 10 thousand people gathered outside the Scottish Parliament Building in Edinburgh to protest against Donald Trump visiting the UK. 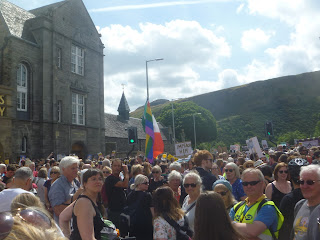 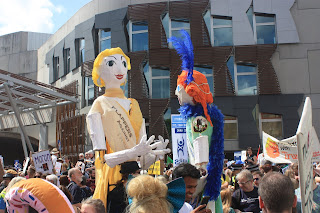 There were some excellent banners and posters 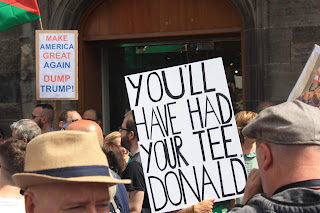 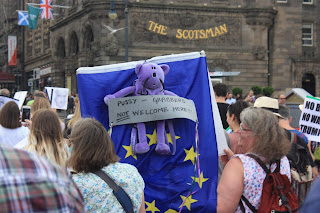 But in some ways the most pertinent for us in the UK was this one (Brexit = Trump. Stop Brexit). 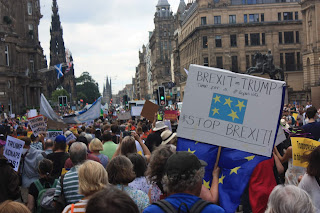 When the UK leaves the European Union we'll need to find new trading agreements and our government is looking towards Trump's America for at least some of these agreements. But whereas the European Union has stringent guidelines and laws on environmental protection and health and welfare, many other potential trading partners (including the USA) have less stringent guidelines and laws. In addition, if the UK trades within the EU it means less long distance transport for our food and other goods, which means fewer carbon emissions, which is better for the environment. 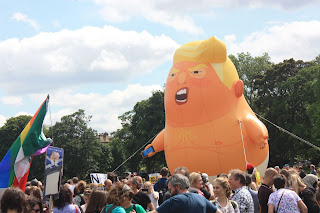 and where there were speakers and bands including Devils in Skirts 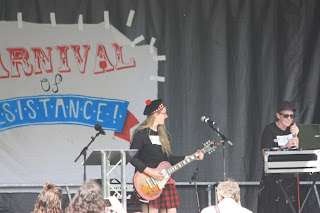 Crafted by Crafty Green Poet at 11:58 am

Well done. Canadians are very afraid.
We have tariffs on their dairy, since the US allows hormones in theirs. They've destroyed the Environmental Protection Agency. It is shameful.
He is simply awful.

Thank you for the most excellent photos and political insight.

I've been watching with amusement all this...

The guy is a total embarrassment to us over here state-side. Some like him, but mainly because he reinforces their particular fears of most "progress" and change. As a role model for youth he is pathetic.

I'm sorry you had to have his ridiculous presence in your lovely country. I'm not a fan of him. :)