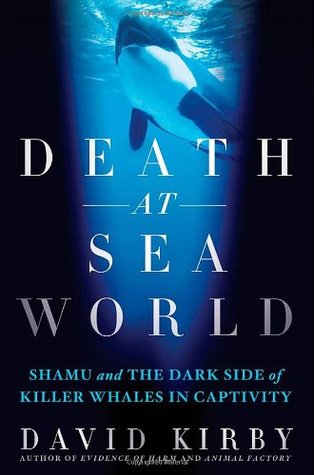 It's a few years ago now that I reviewed Blackfish, the documentary film that exposed the grim reality behind Seaworld and other marine entertainment parks (you can read my review here).

I bought Death at Seaworld soon after watching the film, but just didn't feel up to reading it until recently, given the intensely grim subject matter.

The book is much less sensationalist than the film and meticulously researched, giving the reader priveliged insights into the reality of performing water mammals. The book exposes the cramped conditions, the lack of proper health and safety regulations, the repeated attacks and near misses made by marine mammals (particularly orcas) on their trainers. It goes into great detail of the legal battles around Sea World, particularly the fatalities that have occured (orca Tilikum killed three trainers) and the attempts to release some of the orcas back into the wild.

Orcas live in complex social groups in the wild and roam over large distances across the ocean - they are entirely not suited to a life in captivity confined to a small pool with little interaction with others of their species.

Death at Seaworld is incredibly detailed and not an easy read in some senses, but it is always engaging and engrossing, written almost in the style of a thriller and guaranteed to keep you turning the pages, even as your heart is sinking.

Read this and despair at the human inability to coexist meaningfully with other intelligent creatures.


A book review for 30 Days Wild and Orca Month.

Email ThisBlogThis!Share to TwitterShare to FacebookShare to Pinterest
Thinking about: 30DaysWild, books, review

Sounds very interesting read, must look into it

You've certainly had a very busy time recently with your film and now book reviews.
Humans inability to co-exist meaningfully is at times so very sad ...

I live right where all those orcas were caught, here in Puget Sound, in the 1970's for display. They were from a group of three pods called Southern Residents, and, unlike most other strains of Orca, they only eat salmon. Every one of the 85 or so is named and recognizable. You can go to the website orcanetwork.org and learn a great deal and also read about all the excitement of sighting reports! The attention to them, and their cousins the mammal eaters, in the wild here is amazing. But continued pollution, increasing ship noise, warming waters, and dwindling salmon runs here are causing so much stress. They continue to die faster than they can reproduce viable calves. A very complex, sad, mixed up conundrum for scientists, activists, and policy types!

Thanks for sharing and it does sound like an interesting book.
Orcas really do need to live in the ocean.
Enjoy your weekend
hugs
Carolyn

I've scanned the last few reviews - you've given me some ideas for viewing! I have a little list going. Thank you!