It's the start of 30 Days Wild, the project that encourages everyone to do something wild every day in June! Today I took a slight detour to get to the writing class I was running in Lochend. I got off the bus several stops late (as I often do) and walked into the park. I had got an earlier bus than normal hoping for a longer walk in the park, but unfortunately the bus was very slow so I only got the chance for a short walk and some photos. 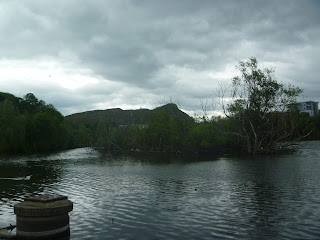 Although you can hardly see them in the photo there's a family of mute swans in amongst the trees to the left of the island. They have 5 or 6 cygnets. I noticed them as I walked into the park, but would have been too far away to have been able to take a decent photo. By the time I was close enough they had hidden themselves away!

Easier to photograph were the lovely yellow flag irises 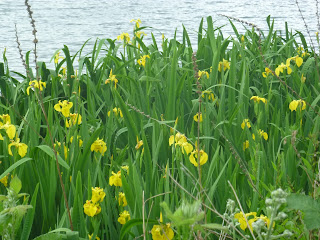 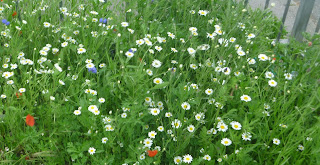 Near to the park I saw a swift, which flew up into a hole under the guttering of a block of flats! It may well be a nest site, so I'll need to keep an eye on that for part of the swift survey which I'm taking part in.

Noticed a swift going in a nest hole last night; we have a few streets of Victorian buildings very suited to their nesting, and used every year.

I remember this from last year. So glad you are doing this again. All lovely things.

Good start! I helped a guy look for Surf Smelt eggs in a microscope! We saw some. Size of a pin head!

Those yellow flag irises are a lovely colour and the wildflower planting does look so colourful.
Great photo's.

Thirty Days Wild is a wonderful idea. It was interesting to see your yellow flags today. Ours have come and gone -- nearly a month ago now, and maybe more. Latitude does make a difference!