Ivy is a feast for insects at this time of year! 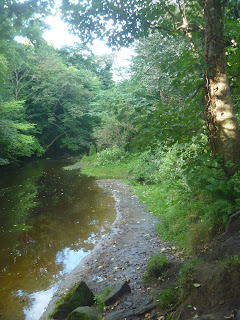 Yesterday I made my weekly patrol of Colinton Dell alongside the Water of Leith. It was a mild but changeable day - the wind blew, it drizzled rain, the sun shone, typical Scottish weather really!

A lot of the ivy is in bloom now (not all of it, different bushes bloom at slightly different times, so in a park like Spylaw Park, where I took these photos, the various ivy plants will bloom one after each other in what almost could be described as a wave).

The hoverflies and wasps love the ivy, this is an Eristalis sp hoverfly on an ivy flower so you can see the detail of the flower in bloom, the other flowers round the central one will bloom in the next week or so. 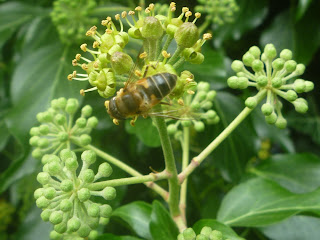 This patch of ivy had attracted just a few hoverflies and bees but over 50 common wasps, which may have been eating some of the hoverflies (scroll down in this post, to see another lovely patch of ivy where we watched wasps killing and eating hoverflies).

As ivy is so important for pollinating insects at this time of year, when many other flowers are no longer blooming, it's really important not to cut your ivy back until it has finished flowering. Ivy doesn't damage trees as much as people think it does and not only attracts lots of insects but is a home for many birds in the springtime.

In another part of the Dells, I was delighted to find this hoverfly Leucozona glaucia (the larger, slightly bluer hoverfly in the photo, seen with two Syrphus sp hoverflies). It seems to be quite an uncommon species for Edinburgh, though we saw plenty of them on our recent holiday in Dumfries. 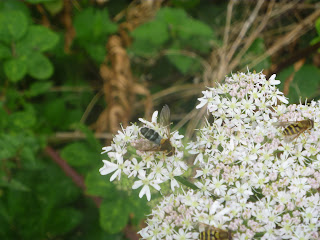 Crafted by Crafty Green Poet at 8:24 am

Yep, my hedges are full of ivy and many species of hoverfly and the odd red admiral are dropping in for a feed. Too far North for ivy bees here though, sadly.

I've enjoyed stopping and watching the ivy flowers lately, some hornets on them (they kill bees and other insects) and quite a few red admirals too. Reminds me of Graves' 'Intercession in late October' - 'on ivy blooms butterflies wag'.

I love it "the wind blew, it drizzled rain, the sun shone, typical Scottish weather really!"
Your photo's are good to look at, so I'm pleased you were able to get out and about.

I have a feeling more rain may be on the way!

Pretty photos. I never thought much about ivy but your post is eye-opening. Thanks for sharing.