some feeding habits of birds 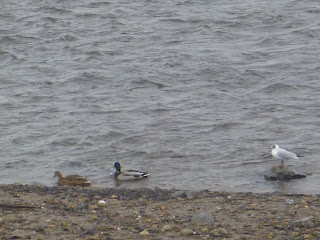 This is a sight I see a lot at Musselburgh. The black headed gull in the photo (with it's summer plumage just starting to grow back in) is keeping an eye on the pair of mallards and will rush to their side if he spies any small piece of food that the mallard dislodges but doesn't eat itself. I've also seen gulls following waders such as redshank to do exactly the same thing, relying on the other birds to find their food! This is an example of commensalism, where one organism (the gull) benefits from another (the mallard) without actually affecting the second in any way.

Later on my walk, a song thrush flew across my path, snail in beak and landed by a stone, where it pounded the snail's shell to pieces then ate the snail! Song thrushes are well known for this feeding behaviour, but it can be tricky to actually see (specially these days as the song thrush is declining in numbers). It is more likely that you may on occasion find a stone (the thrush's anvil stone) surrounded by scattered snail shells and if you do, you may want to hang around (at a discreet distance) for a while to see if the thrush returns.

You are very very observant!

Our blackheaded gulls are starting to sport summer hats again; one or two individuals it has completely grown back in now.

Great post, I would say the gull is either very smart or just lazy! Have a happy weekend!

That was a lucky encounter! :-) A song thrush sighting is not that common. Thanks.

Interesting post of the feeding habits of birds and how neat that you got to see the thrush preparing his snail dinner.
Enjoy the weekend
Hugs
Catolyn