I've blogged before about Figgate Park, which really is the best city park for birdwatching in Edinburgh.We were very lucky with the weather yesterday, it was clear and sunny, ideal for a walk round this lovely park. (Yoday is dull, rainy and very windy).

The male shoveller that is often seen on Figgate Pond was more than usually friendly yesterday and allowed Crafty Green Boyfriend to take several photos. 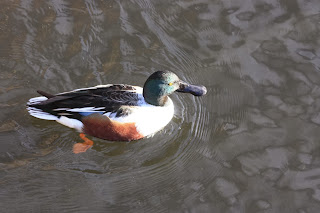 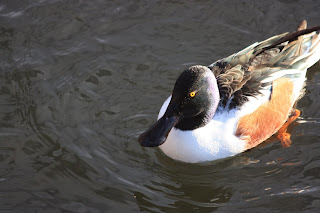 There were four gadwall on the pond, though they stayed quite a distance away from us. One of the males is shining in the sun in the centre of this photo, the gulls in the photo are black headed gulls and the duck at the front is a female tufted duck. 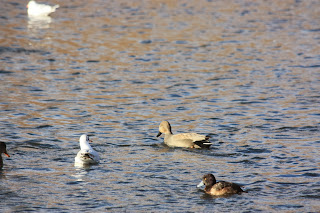 The mute swan family passed by in a most photogenic way 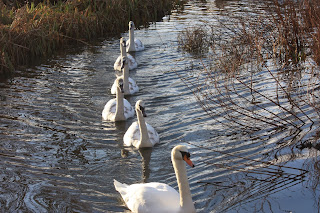 while three cormorants were hanging around 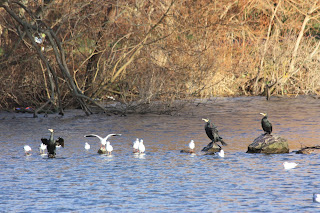 There were lots of other birds around including this adorable little pied wagtail, it's face a little yellow in its winter plumage. 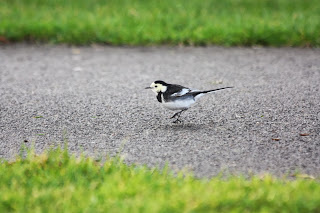 All photos in this blog post were taken by Crafty Green Boyfriend.

the swan trail is beautiful. except for the swans and the wagtail, we will get these same ducks here in texas. :)

Great variety of birds. The photos are wonderful. The Wagtail is one of my favorites. Happy Birding and have a great weekend!

All such beautiful photos! The duck is beautiful, and the swans.. well they're just magnificent! :)

Isn't that a great pix with the swans? All very nice too! What a variety...