We woke up this morning intending to go to Peebles and walk either along the river or in the woods. However we spent so long waiting for a bus connection in Penicuik (and when the bus arrived it was full to overflowing!) that we gave up and decided to walk along the River Esk as it flows through Penicuik. 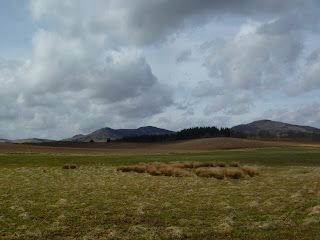 The first two paths we tried were very pretty in parts but came up against obstacles (an impoasable landslide in one case and a total lack of signage in the middle of muddy fields in the other case). The third path we tried was the path that runs from Penicuik to Dalkeith along the River Esk. This seems to be a much more professionally maintained path, but by this time we didn't feel we had the time to do the whole walk, so we just did a short part of it and will go back to do the complete walk. 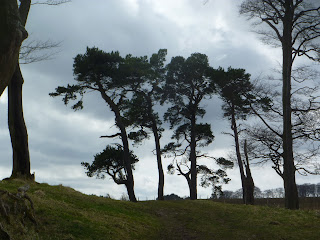 Lots of lovely birds and plants along the various paths. At one point we stopped in front of a copse of birch trees and conifers and just watched as siskins, blue tits, chaffinches, long tailed tits and coal tits all wandered by. All to the soundtrack of willow warblers, whose melancholy downward trilling warble is one of my favourite sounds of springtime. Up in the fields we saw the first wheatear of the year alongside a flock of meadow pipits. 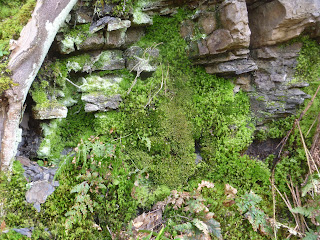 Part of the path runs along an old railway line, the walls of which are wonderfully covered in parts in mosses, liverworts and other plants.

There was coltsfoot everywhere too! 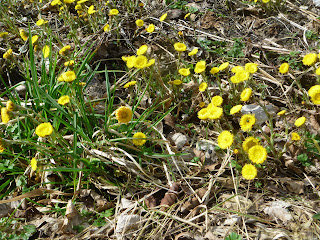 As ever, red text contains hyperlinks that take you to other webpages where you can find out more.
Crafted by Crafty Green Poet at 7:16 pm

Looks like a wonderful place to walk and maybe next time the bus will be less crowded and you can get to the place you intended.
Hope you are having a lovely weekend
hugs
Carolyn

I loved the photo of the mossy rock wall. Thanks for sharing you walk in photos and words.

you go to the coolest Places,xx Speedy

riverside walk
the twists and turns
between us

Beautiful. I especially love the part along the old railway line. Those are fun to walk along, as you see nature slowly reclaiming and interacting with construction.