Birding and an interesting find

A chaffinch sings. I love the fact that chaffinches have dialects depending on where they live. This one though, seems to have a dialect all of its own. It sings quite distinctly 'Scooby Doo' at the end of every phrase.

I enjoy the quieteness here, very few people around most times. Today though in one of the hides:

discussing football
the birdwatching group waits
for a rarity.

I don't know what the rarity was. I love seeing the variety of birds here, there's always something different even on the days when I don't see a rarity.

Today the most notable find though is a large number of pellets, produced by birds of prey that have been deposited on the sea walls. I've rarely seen these pellets here, and never in such number. 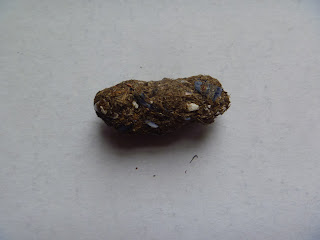 Using the RSPB's helpful guide to bird of prey pellets, I work out that these are probably from kestrels or short eared owls. Short eared owls are rare, daytime hunting owls, but are seen frequently round here. I had a very close encounter with one a few months ago.

As ever, red text contains hyperlinks that take you to other webpages where you can find out more.
Crafted by Crafty Green Poet at 2:04 pm

Email ThisBlogThis!Share to TwitterShare to FacebookShare to Pinterest
Thinking about: birds, haibun, haiku, In and around Edinburgh, nature diary

we get quite a lot of owl pellets in our fields Juliet - usually under the trees. We have Scots pines outside our house as a shelter from the prevailing wind and we hear owls in them at night and can usually find a pellet or two - fascinating things aren#'t they?

What a productive nature walk you had!

Certainly more significant than from a rabbit!!

i just luv this phrase
"losing their fluffiness"

I have never found one, but love a good nature mystery...Michelle