On Sunday afternoon I was at a Water of Leith Conservation Trust volunteer meeting, where we passed round a jar which contained a piece of otter spraint (poo!) (as you do!). It actually smells surprisingly pleasant, sort of a fishy jasmine tea type of smell.

Yesterday I was at the Trust's AGM where the guest speaker was ecologist Melanie Findlay of Findlay Ecology Services. Melanie is an otter expert (though she didn't share the secret behind the jasmine tea scent of otter poo!) and a very engaging speaker. She shared a lot of information about the otters' family life (including some adorable video clips of young otters) and about their diet (mostly eels and other fish, but they also eat invertebrates and have been known to eat rabbits! She also showed photos of various signs of otters, not just spraint, but also a weird looking stuff that is formed when otters eat frogs and then spit out the unformed spawn - this is exactly what I had seen recently in Musselburgh (so there are probably otters there!). The otters are doing well on the Water of Leith but are generally elusive (I've only seen one once!).

Today was my regular patrolling walk along part of the river, that I do as part of my volunteering with the trust. I was particularly delighted to see two great spotted woodpeckers as well as dippers, a heron, a buzzard and a flock of long tailed tits. But the most unusual wildlife sighting wasn't a bird but about a hundred orange ladybirds (Halyzia 16-guttata), all gathered in groups in the tops of fence posts! I've never seen this type of ladybird here before and never anywhere in such numbers! The photo isn't any good, but it gives you an idea of how many of these insects were gathering together. 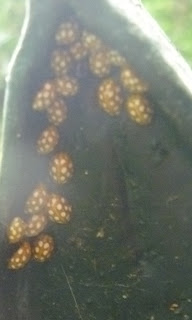 You can find me on Daily Haiku again! Today's haiku is about the Colinton tunnel on the Water of Leith walkway!

As ever, text in red contains hyperlinks that take you to other webpages where you can find out more.
Crafted by Crafty Green Poet at 2:28 pm

Interesting Juliet. I have sent details to my friend, who is interested in such things and is a volunteer at Foxglove Covert, the MOD nature reserve on Catterick Garrison.

As always im blown away when i visit,

I'm sure Helen at the Ladybird survey would be interested in this, Juliet, and your photo. I'm jealous ;-) !

What interesting ladybugs! I wonder if they're a rare variety.

Actually this is great news about otters'poo. Maybe the only in the world smelling pleasant. Maybe I ezaggerate but sounds like something God forgot from Eden and left for us to discover in this valley of tears!

For dogs actually it's a kind of heaven they already know, for them I think every poo smell deliciously...

Oh, I am not surprised that otters eat rabbits...I think otters are connected with the ferrets family, and ferrets, I think, hunt rabbits.

thanks Caroline - that's a good point and I have bookmarked the Ladybird survey website to go back to so I'll let them know!

Ms Sparrow, I don't think they're rare, but they are certainly often overlooked!

Gillena - ladybirds come in a full range of colours!

Always interesting to come and visit you and thanks for sharing.
As we do not have otters here, great to read your post. Cute orange ladybirds.

what interesting ladybirds! and good to know there are otters around here!

Here in Puget Sound the Southern Resident pods of Orcas are Endangered and so studied a lot. One group has a dog that rides in the bow of a boat and can detect the smell of whale poop so they can collect it for analysis of diet etc!!!

Never seen those lady bugs - ours are red and only gather in large numbers on a warm side of a house when they first hatch.

Tommaso - yes you're right, otters are related to ferrets etc.

Juliet, I'd love to see (and photograph) these ladybirds. On what stretch of the river are they?

Thanks, Juliet. I was hoping they were in the Dean Village area so I could pop out at lunch time. I may not get there after all. I haven't seen a single ladybird since February! How wonderful to see so many together, and Orange ones too!