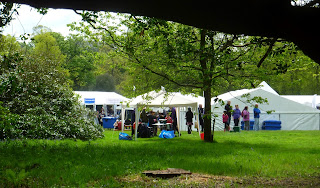 I was delighted that the RSPB gave me two free tickets for their Scottish Birdfair at Hopetoun House near Dalmeny in West Lothian. All proceeds of the event go to help conserve the Slavonian grebe, an iconic bird of the Scottish Highlands.

Crafty Green Boyfriend and I had a very enjoyable time there today. We enjoyed walking through the grounds of the House, which are beautifully full of primroses, bluebells and other wild flowers. 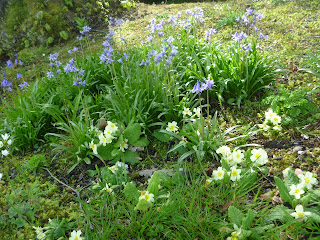 And this wonderful sculpture and table which could have been specially designed for the occasion. 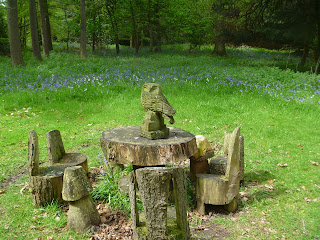 As for the event itself there was a packed programme of workshops and talks. John Lister Kaye (who founded the Aigas Field Studies Centre in the north of Scotland and wrote the brilliant Song of the Rolling Earth, which I reviewed here) gave an informative and inspiring talk about the reintroduction of the European beaver into Scotland. There were plenty of cute photos of the beavers at Aigas to win the doubters over (though there seemed to be few of those in the audience).

Rory Crawford, RSPB Scotland's marine campaigner, gave an interesting and sobering talk about the state of Scotland's seabirds. The coasts of Scotland are home to very significant numbers of many species of seabirds and some of the colonies, specially in and around Orkney and Shetland have recently seen catastrophic declines. On the other hand, other species in other parts of Scotland are doing really well. Rory outlined the reasons behind the population changes, including the effects of climate change on the food species that are vital in maintaining the seabird populations.

We also attended the workshop on wader identification. Dave Allen of the Scottish Ornithologists Club bravely tried to give us an overview of all the waders (sandpipers and their allies,  and plovers) but several of the species are very confusing and 50 minutes just wasn't enough time though he did his best and I certainly learnt a few tips for identifying some of the species!

There were also a lot of interesting exhibitors offering information on birds and conservation in Scotland and books, optical equipment and artworks for sale.

The beer tent offered an excellent range of Scottish real ales, including Slavonian Grebe Gold which had been brewed specially for the occasion by Falkirk Tryst Brewery. To be honest it's a bit insipid and we both preferred the more characterful Bean Goose from the same brewery. Good though that a brewery got on board to help raise money for the Slavonian Grebe project supported by the Fair.

Overall it was an excellent day and there's more tomorrow including talks on the importance of moths and the history of bird conservation in Scotland, workshops on raptor identification and gardening with wildlife and wildlife walks including Eco Expeditios for children.

If you do go tomorrow, you should be aware that if you travel by public transport, there is only one shuttle bus an hour from each of Linlithgow and Dalmeny railway stations, the pick up points for these shuttle buses are not sign-posted and the buses carry only 15 people each). This is pretty poor for a conservation event which should be encouraging people to use public transport.

If you're vegetarian, you might like to take a packed lunch as pretty much the only vegetarian food we saw were iced yoghurts (which in the wintry temperatures we're still enduring are not appealing) and one type of vegetarian soup. We were relieved though to find no trace of hog roasts, despite all rumours. The Artisan Roast company turned out to be serving coffee, hot chocolates and granola bars. We had to wait ages to be served but the granola bars were certainly worth the wait and were the best of the vegetarian menu. 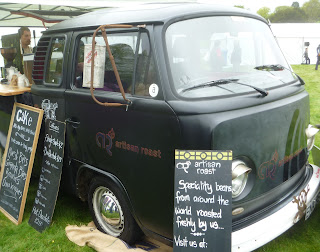 I'll post about the absolute highlight of the event tomorrow, so be sure to visit back!
Crafted by Crafty Green Poet at 7:29 pm

Oh, that's looks like a wonderful day. And dry!

Sounds like you're having a terrific time. Thanks for the photos and details.

I enjoyed the Lister Kaye book, and would have been interested to have heard more about the beavers ... we hear such mixed feelings on both sides about their reintroduction ...