Trees along the Water of Leith 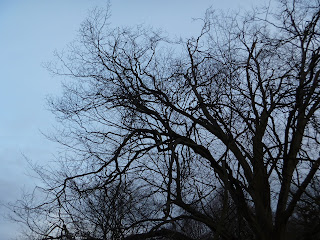 I have started to study one of the hornbeams along the Water of Leith as part of the Tree Year project. I can see there may be a problem with this already. I mentioned in a recent post that this hornbeam had been damaged in the winter storms and now it has been trimmed back and tidied and has no low hanging branches for me to take photos of or even make sketches from. It also seems that the other hornbeam along 'my' part of the Water of Leith was blown down in the storms. So I won't be able to do such a detailed study of this tree as I thought, but I'll see what I can do. At the top of this post is a photo I took of the hornbeam today. Its buds are just starting to swell though you can't see that in the photo.
Below is a photo of a rather handsome holly tree also along the Water of Leith. It has such a magnificent gnarled trunk. I thought I would also include this in my Tree Year. And as there are some lovely hawthorn trees along the river, maybe I'll include them in to my Tree Year too! 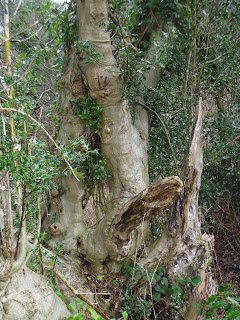 I saw a lot of birdlife along the river today and for the River of Stones:
Blue tits were chasing each other through the branches, the dippers were paired up and singing
A great spotted flycatcher flew into a tree, crept around the trunk then flew off again
Long tailed tits everywhere, their most endearing habit is that they come towards me when I stop.
Crafted by Crafty Green Poet at 7:20 pm

Email ThisBlogThis!Share to TwitterShare to FacebookShare to Pinterest
Thinking about: aros, birds, In and around Edinburgh, nature diary, river of stones, Water of Leith

I shall do my today's aros on long tailed tits too as they have started visiting our fat balls - aren't they exquisite little birds.

What a beautiful Holly tree.

I love the the trunk on that tree. I have River Birch that David and I planted in our yard. The peeling bark on them is so beautiful. Such a shame people don't enjoy the beauty of trees more.
xx, shell

I really like what you're doing, Juliet, and you have the eye of a haiku poet.

HI Weaver - they're one of my favourites, exquisite as you say

Gabrielle it certainly is!

Michelle - it's the trunk that msot impresses me about this tree and you're right, its a shame people don't generally enjoy trees more

It's fortunate you saw that the hornbeam had been damaged so that you knew why it was trimmed otherwise, it could have been a bit of a shock! It will be interesting to see how it responds. Sometimes damage makes trees come to life all the more, as if they have a challenge to meet. That must be a very old holly tree. A few years ago I found some fallen holly leaves that had deteriorated over time, and the intricate lacing of veins, surrounded by the leathery brown leaf frame was beautiful. I must share the photos on my blog before long. Commenters have let me know that your Long Tailed Tits are similar to our Bushtits, which are adorable little souls.

Sorry your hornbeam observations have been hampered. That holly does, indeed, have a great deal of character.

Even if you can't get the shots you want, I like the ones you did get. And your description fills in the blanks pretty well :)

Oh, I so would love to see the birdies!
Especially the LT Tit. I saw one once in Hungary, but only very briefly!

Hi, Juliet, I'm hoping you'll still carry on with hornbeam--in North America, there are so many different trees with that name, so I'm pleased to find out about the "real" one.

I'm fascinated by your blog--thank you for dropping by mine!

I love the idea of following a tree for a year! I will try to participate as well, but probably unofficially. I look forward to reading more hornbeam updates (I actually hadn't heard of a hornbeam before this) and will be rooting for your hornbeam's recovery!