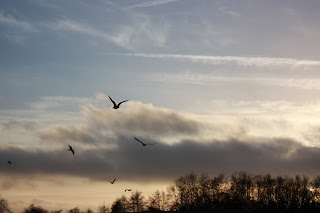 Blackleach Country Park, photo by Crafty Green Boyfriend
We had a lovely visit to my parents this weekend, enjoying much warmer temperatures than Edinburgh! We discovered Blackleach Country park, which is almost on my parents' doorstep. This was designated as a country park in 2004 (it was derelict land when I was growing up) and has a lake and some nice walks. We saw a good flock of long tailed tits in the trees as well as lots of water birds, including large numbers of coots.
My parents' garden was also full of birds, notably up to ten goldfinches on the bird feeders, several blackbirds fighting over the sultanas, blue tits, a song thrush (which despite their recent declines in number are still regularly seen and heard near my parents' home), a dunnock, a wren and a very good view of a jay, which is a big handsome bird that I don't often get a close look at.
The train journey from Bolton to Edinburgh is always lovely, passing through the English Lake District and southern Scotland. It looked particularly lovely with the dustings of snow. We also noticed the Cauldstane Slap pass, which is nicely visible from the train as it passes between Carstairs and Edinburgh and which the Belvedere Mountain Express album was named after.
We got back to Edinburgh yesterday to find that my reading at TraVerses was cancelled, which was a relief in some ways as I don't really like rushing around and didn't really feel like going straight out to read after getting off a train!
As ever, red text in this post contains hyperlinks to other pages where you can find out more.
Crafted by Crafty Green Poet at 9:46 pm

Email ThisBlogThis!Share to TwitterShare to FacebookShare to Pinterest
Thinking about: birds, nature diary

Crafty Green Poet's boyfriend took a wonderful photo of the birds flying over the park.

I can understand not wanting to rush from one event to another. Some people thrive on constant action with no breaks...and others not so much.

The train's the way to travel - you can look out the window and watch the world go by in peace and comfort.Just a shame it doesn't go everywhere and is so dear.

Well spotted with the jay - I've never seen one of those.

glad to hear you had a nice visit with your parents and got to see so many beautiful birds/ landscape along the way. beautiful picture, btw. i understand fully about wanting to rest before rushing to an event. glad you had that opportunity. have a great day.

That is a really nice shot.

I just love the interesting names you have for places there. What exactly is a slap?

That is a really nice shot.

I just love the interesting names you have for places there. What exactly is a slap?

Sounds wonderful and you are making me want to visit that part of the world - I have been but not since I was 9 :)

Hi, What a terrific 'wish I was there' blog! I adore birds, and often think I would love to come back in another life as one. JUst think of what you'd see! Thank you for sharing such a lovely vision with us!

In answer to Sandy, nobody really knows the meaning of the name Cauldstane Slap – it is lost in the mists of time. ‘Cauld stane’ is Scots for ‘cold stone’, but a slap? Who knows! There is also a hill in the city of Edinburgh itself with the wonderful name Buckstone Snab, but don’t ask what a snab is!

Juliet, I’m glad I didn’t bother going along to the Traverse Theatre, as your reading was cancelled!

A gorgeous photo and I can just imagine how incredible a train ride through such a beautiful place would be. I have never ridden on a train, but one day I will.
xx, shell