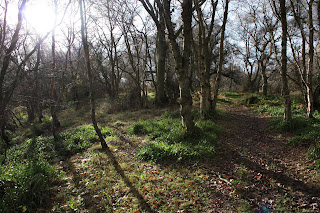 We had a lovely walk this morning in Calder Wood, an ancient woodland which is part of the Almondell Country Park in West Lothian. There is a convenient bus that goes almost directly from our front door to the start of the walk (though we got off the bus a couple of stops early!). The bus passes through quite a lot of farmland and we saw a large gathering of geese, two or three skeins merging together as they landed in a field.

The woodland is one of the few areas of ancient woodland in West Lothian and covers an area that was previously used as a shale mine (or so we were told by a cyclist who stopped to chat with us for a while). Large parts of the area are covered in very old birch trees like the one below. 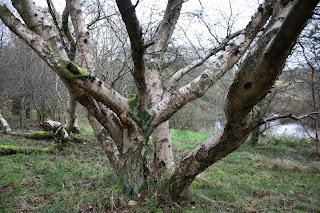 The paths through the woodland were very muddy! We saw lots of birds, including a group of redwings flying about, a couple of bullfinches, a crow mobbing a buzzard then later four buzzards circling overhead with a possible fifth calling off to the side. Also a flock of around 30 lesser redpolls flying from birch tree to birch tree to hang in the branches to feed. On the way back into Edinburgh we saw a young swan sitting on a grass verge by the main road, with a police officer making notes by its side. That would have made a fun photo..... (Crafty Green Boyfriend took the photos in this post as my camera batteries ran out!)

wow, the trees are giving you great shadow shots...I like this.

What a beautiful place to walk! And what lovely shadow shots! Marvelous!

The bare trees leave an imposing shadow. But the blend of turf and trees is soothing, the sun and shadows an invite to relax and reflect in this place...

How wonderful to get off the bus earlier and have that morning walk with Nature...the sun is trying to peek out a bit here in Iowa...I think a walk in the woods is a grand idea...thanks!!!

Those trees are lovely Juliet - and nice to see you have little or no fog up there - here it is thick fog and has never really got properly light today.

Beautiful photos! Shadows and their trees.

Thank you for your comment on booklists. I'd love to see yours of course, and I would like to try and develop these ideas more in the future... any suggestions you might have would be wonderful...

nice pics crafty green mate. i love the light and shadows at this time of year especially early in the morning and late in the day. the colours are amazing. steven

Lovely photos to capture the flavour of changing seasons, marvelous place for a long walk.

Sounds like a lovely walk and day. I was just thinking that the swans will be back in the farm fields around here, if they aren't already back.

Nice shots! I never heard of flying geese being called a "skein" before, it's a perfect description!

Looks like a lovely wood. just the term 'ancient woodland' makes me feel happy! I had not heard of redpolls before. I love the RSPB website. I wonder what the swan had done?! I once called the police because there were a pair of swans wandering along the hard shoulder of the motorway-in great danger of being squashed and causing a crash. We also saw a horse on the hard shoulder once-another call to the police!

What a beautiful place - and great shadows!

Great report on the walk - and pix.

Looks like your day was off to a great start! What a lovely setting to take a walk.

I can show you the shale mines next time you go - there's an open mine gallery hidden by the Linhouse Water, leading to the 'stoop and room' workings.

I'm glad he still had good batteries ;-) he bailed you out.

I like the shadows the trees are making. Must be a lovely spot to take a walk.

Happy Sunday and thanks for stopping by to see Rigby.

good shadows of the trees!

I love trees, but these old trees are sure a wonderful sight!
Makes me wanna pack my bags and join you on your next walk :)

How beautiful. Makes me want to see the U.K.

Lovely shadows from your walk in the woods. Sounds like the bird life is very active there!

One of our favourite places to walk. CGB took some great shots. Jupiter artland is just up th road from there - I'm guessing your bus would have passed the gates.

Your walk in the woods sounds so delightful. The shadows you captured while enjoying Mother Nature are divine.

A beautiful woodland area for a walk; the morning sun and shadows looked so peaceful.

I love going for enchanting walks in the woods. Thanks for sharing your gorgeous tree shadows :)

Thanks for visiting my blog and commenting on my Barrel of Monkeys shadow shot!

Everything except the brass band - which would probably be a bad idea, under the circumstances.

The treels and shadows are very evocative. I can smell the damp air.

Lovely shadow shots and beautiful woodland.
Thanks for sharing.
Have a nice week!

Thanks for this hike in Scotland! It's great! When I was in Scotland it was summer and the sun was shining, but we also had an occasional rain. Your country is beautiful!

What a lovely post, and great blog in general. I found you through Green Ink and will be popping back.

Beautiful photos Juliet - and I love the new banner you have of the frosted leaf!

And thanks for voting for me :) xx

What a pretty place. That old birch tree is just so gnarly and interesting. It makes you want to have a little picnic underneath it.

Yet another nearby place that I've still to get to. Looks very worth getting out of the city to explore.

Wow, it really looks like a nice place for morning walks!

That looks like a great park for a walk and a photo shoot.

S beautiful. Is Calder where they have wolves?

文章 said...
This comment has been removed by a blog administrator.
7:53 am