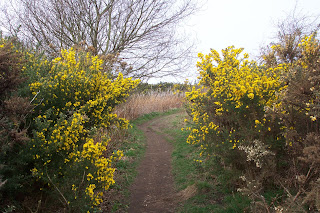 It was definitely Spring up Corstorphine Hill when we walked up yesterday! There was a light mist early on that lifted later, leaving glorious blue sky. The temperature was mild, though with a slight chill. The birds were all singing wonderfully, we heard blackbirds, robins, chaffinches, great tits and blue tits. It was wonderful to hear a song thrush in full voice, one of my favourite songbirds, it is declining in number hugely these days and is a much rarer sound than it used to be. We also heard a great spotted woodpecker drumming. A group of four jackdaws were testing out holes in a dead tree as potential nest sites and squabbling a lot as they did so. The gorse was in bloom, looking quite wonderful (see photo above). There were also celandines, daffodils, violets, primroses and a couple of speedwells. The trees were wonderful too, the ash with its grey twigs and firm black buds, the hazel with tiny leaves just starting to unfurl and the sycamores well on the way to being in full leaf. 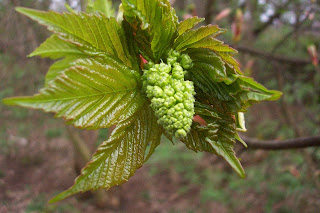 We saw a couple of rabbits in the undergrowth and some kudu at the top of the hill (in the African Plains area of the zoo!).

Crafted by Crafty Green Poet at 8:56 am

Email ThisBlogThis!Share to TwitterShare to FacebookShare to Pinterest
Thinking about: birds, In and around Edinburgh, seasons

The gorse is wonderful this time of year, isn't it? I just love walking down paths like the one in your photo.

Oooh, beautiful. I have not walked on Corstorphine Hill - it is on my list of places to go.

Lovely photograph Juliet - the shine on those new leaves. I always think that for a few weeks afte rthe leaves emerge they are shiny and new and then they begin to dull and get dusty. What an odd name for a hill - where does that word come from?

Love the picture on top. Feels like spring here too. :)

Ah sweet spring at last...
What you call gorse we call broom here. I think it's wonderfully bright but it is considered an extremely invasive plant here an much is done to try to get rid of it.

Gorse and broom (scotch broom) are similar but not the same. Gorse has extreme serious pickers on the stems .. like a rose or blackberry!

Aha! So THAT's gorse! I always wonder; it gets mentioned a lot in British lit.

Weaver - Corstorphine is the name of the village (now part of Edinburgh) that lies at the bottom of the hill. The background to the name is a bit cloudy but it might be from Cross of Torphin.

Janice - no, broom and gorse are different, as Rabbits Guy says (thanks RG).

I do love your walks. So nice to see all those birds, particularly the songbirds. It sounds like a magical place to walk!

Sweet signs of spring! YAY! Love the cow, too!