After our attempt on Schiehallion on Saturday we felt like a much more relaxed walk today so we wandered along the Union Canal through Edinburgh. Every time we do this walk we are impressed by the wildlife we see. Today the birds were singing loudly including robins, blackbirds, chaffinches, great tits and blue tits. We also heard a song thrush, which is always reassuring these days that their numbers are declining so badly. There were also lots of house sparrows, another bird in sharp decline. We also had our best ever view of a blackcap, a bird which has a beautiful song that I have often heard but that is relatively difficult to see. On the canal itself we saw mallards, a pair of mute swans (the male patrolling the water, while the female was building a nest on the far bank) and some moorhens.

We saw two peacock butterflies and a comma, which is a species that has declined but is now recovering quite dramatically. The new banner photo (taken by Crafty Green Boyfriend) shows a peacock feeding on ragwort with white dead nettles to the right of the photo. Below are some white dead nettles next to some stinging nettles for comparison. 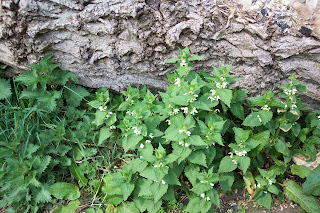 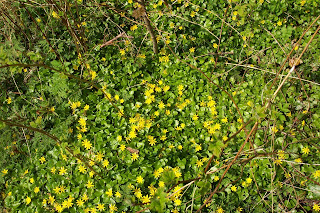 We walked down to a pub on the banks of the Water of Leith for lunch and there were saw two dippers and a heron.
Crafted by Crafty Green Poet at 2:39 pm

What a wonderful way to spend the day! I love house sparrows.

What a gorgeous butterfly - so bright! We have no shortage of house sparrows here which stay here all year round - was surprised to hear they are in decline there. Always enjoy walking with you on your trips Juliet even if it is in a virtual way.

Plenty to report on ... thanks.

Quite a lot of birds and butterflies spotted in one walk! What an enjoyable outing :) I love the markings on the Peacock Butterfly, they're so captivating!

I love the peacock butterfly photo: so pleased, too, to hear that the beautiful comma is making a come-back. This is news to me. Do you know the reason?

What a lovely walk. Enjoying your pictures on this site... I've only been to Scotland once, but the images of green and historical places stay with me.

Sounds like a lovely walk. I know what you mean about species being in decline. I'm count myself very lucky to have a song thrush living closeby - wonderful sounds.

I agree, sounds like a wonderful walk. We have lots of house sparrows here too. And I have a variety of celandine growing in my garden. Not invasive, thank goodness!