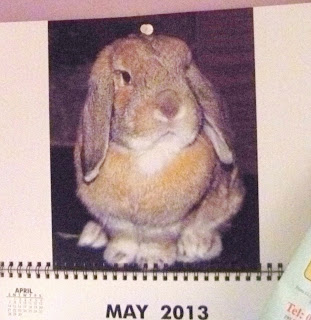 There's a traditional saying of 'rabbit, white rabbit, white rabbit' to greet the new month. But this new month of May is being greeted by the handsome and delightfully disapproving Mr Mick of Zen of Bun. Here he is in the House Rabbit Connection calendar which he sent me at the beginning of the year.

Mr Mick is becoming a bit of an international superstar, what with all his appearances on calendars and even candles. So we're honoured to have him gracing our kitchen wall for the next month.

***
May is a time of birdsong of course. Last night, April went out with a wonderful evening chorus from the birds at Figgate Park, where I took my birdwatching class. Today, I was in Musselburgh, delighted by the hundred or so house martins swooping above the river, the skylarks and meadow pipits singing above the fields by the John Muir Walkway, the willow warblers singing in the willow treesby the boating pond and the willow warblers and skylarks that I could hear while sitting in the bird hide.

***
May is a time also of bees buzzing in the flowers, or it should be. Bee numbers are declining drastically, so it was good news that the European Union recently banned the use of neonicotinoid pesticides, which seem to be one of the several factors causing the decrease in bee numbers. Meanwhile, the online poetry journal Ink, Sweat and Tears has started a season of bee poetry and I'm delighted that my poem Fistful of Bees is featured.

As ever, red text contains hyperlinks that take you to other webpages where you can find out more.
Crafted by Crafty Green Poet at 2:02 pm

Email ThisBlogThis!Share to TwitterShare to FacebookShare to Pinterest
Thinking about: birds, In and around Edinburgh, published, rabbits

How bad am I that I forgot about my Mr. May? Haven't had a chance to switch the calendar over yet. Glad you're enjoying my grumpy bunneh. :D

You are so lucky to have house martins. We have not seen a single one here yet and even the swallows are very late to arrive.

The most gorgeous rabbit I have ever seen in my life.

It is perfectly in tune with the picture of you I have in my mind reading that you don't have a mobile phone.

Well..as for myself..before having a mobile phone I was better with phone-calls, I phoned people, even if not often, instead of texting them very often like now and maybe it was more human and real, phoning. And I remembered phone numbers, a skill the mobiles have tampered...So I am not sure mobile phones are an improvement...

I love your "fist full of bees."

The decline of bees is really a bad omen.

he is a very adorable rabbit! look at that face!~

That's a handsome rabbit. I love listening to birds and bees too. The only problem with bees this time of the year is we've been having some cold nights and the bees seem pretty agitated.

A picture full of Micky and a Fist full of bees ...

Makes a follower happy with what he reads and sees!!!

Bunny!! We used to have a house rabbit when I was a little boy :)

This makes everything so right!yippee!

I first heard about that tradition a while ago from another blogger I read (Hildred at Day By Day)...