Today's event at the Edinburgh International Science Festival was Catalytic Clothing. Professor Helen Storey who is an artist and fashion designer at the Centre for Sustainable Fashion at London College of Fashion has worked with polymer chemist Professor Tony Ryan to produce catalytic clothing and clothes conditioners. The idea being that wearing these clothes, or ordinary clothes treated with these conditioners, one can catalyse pollutants into harmless chemicals. The idea is very much still in the early stages and so far has only been rigorously tested with nitric oxide which produces nitrates as an end result. These nitrates then wash out of the clothes and into the water supply, which could be a problem (that being one of the issues still being studied and nitrate run-off from agricultural land being a major issue). There was excellent audience discussion facilitated by Professor John Shephard, which centred on issues such as the need to reduce pollution in the first place and the potential side effects of the clothing. I was very impressed by the openness of Professors Helen Story and Tony Ryan in taking their ideas into the world for discussion at this early stage. Not only is this project a very good example of art and science working together, but also a very good example of open research. Whether it will prove to be a genuine environmental solution remains to be seen, but as a concept it is certainly very exciting!


Earlier in the day I had visited the small exhibition of catalytic jeans and kilts in St Andrews Square. 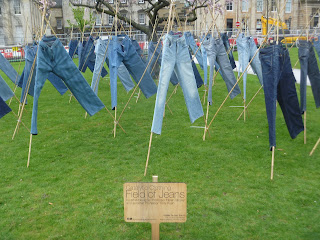 Luckily by this time the sleet, snow and hail had stopped (although it was still very cold) so I was able to enjoy the wonderful Invisible Worlds exhibition, which includes incredibly beautiful images of microscopic nature and immense galaxies. I'd passed it on the bus several times, but it is definitely worth getting off the bus and having a really good look. 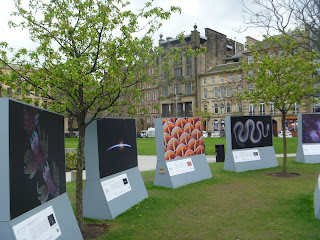 Disclaimer - Clicket gave me a free ticket for the Catalytic Clothes event.

As ever, text in red contains hyperlinks that take you to other webpages where you can find out more.

Email ThisBlogThis!Share to TwitterShare to FacebookShare to Pinterest
Thinking about: art, Edinburgh International Science Festival, In and around Edinburgh

Altogether fascinating. How refreshing to have an open discussion between art and science in the interest of the environment.

Juliet, I had to laugh at the sound of "catalytic" clothes. Because of what is going on at my house, I think I have "CAT-a-lytic" clothing.

The "Field of Jeans" is very funny and surreal....I love that.

Hmmmm... Don't know about this idea. But, I completely applaud the exploration. For decades we lived with that abysmal polyester clothing, and the formaldehyde that was used to process it. Finally, folks started to realize that we were walking around clothed in poison. Not such a good idea.

When it comes to clothing, one of the saddest things to me is that people increasingly are forbidden to use clothes lines - and the power of the sun and wind to dry their laundry. In order to achieve a uniform "beauty" home owner associations forbid exactly the sort of "old-fashioned" activity that used to be common.

Nothing in the world is better than laundry smelling of the sunshine and wind!

That Invisible Worlds exhibition looks fascinating, Juliet. It reminds me (a bit) of the mind-blowing 'Earth from the Air' exhibition which I enjoyed in Swansea and Bath 18 months or so ago.

What interesting, helpful ideas were presented. Every little bit helps when it comes to protecting the environment.

I love the catalytic jeans! what fun!

Looks like a fun exhibition and thanks for showing us.
I am with Shoreacres about the clothesline, that is all I use as I do not own a clothes dryer.