It's an Edinburgh tradition to walk round Arthur's Seat and the Salisbury Crags on New Year's Day. Crafty Green Boyfriend and I have joined in the tradition for several years now. Today the weather was beautifully mild, though very windy. We had a great start to our birdwatching year seeing a total of 21 species (almost twice the number we saw last New Year's Day and not bad for a wee walk round Edinburgh). One of the stars of the show was definitely the kestrel that was hovering nearby almost the whole time we were walking (though it could have been more than one in fact). 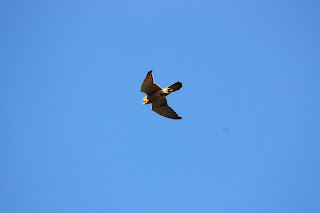 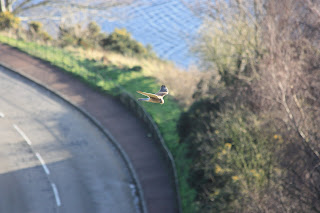 The other stars were the redpolls, a bird that I hadn't seen for years until they turned up in my parents' garden in our recent visit there and then here they were on Arthur's Seat, making a real mess as they fed on the alder catkins. You cansee the little red head patch quite nicely in this photo. 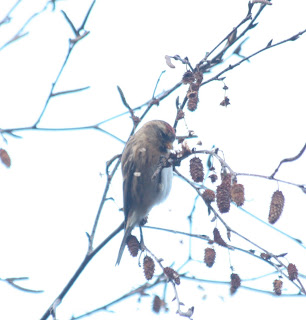 We also saw a very acrobatic crow, swooping and diving in the air, at one point flying almost upside down. It's behaviour and in fact its shape made us think it was a raven (and we know there are ravens on Arthur's Seat) but it just didn't seem big enough compared to the other crows that were around. We finally decided it must be an adolescent rook, which (I think) is more likely to indulge in aerobatic displays than is a carrion crow and is more like a raven in shape (certainly as regards the tail) than is a carrion crow. So a slight mystery there, but it was fascinating to watch.

As ever, text in red contains hyperlinks that take you to other web-pages where you can find out more. All photos by Crafty Green Boyfriend and if you click on them you can see them in a larger size.
Crafted by Crafty Green Poet at 4:18 pm

What a neat New Year's tradition.

We see a kestrel or two around here now and then, but mostly red-tailed hawks and great horned owls. I love to see them, but have to do raptor watch if I put the bunnies out to play.

Sounds like a good start to the years birdwatching.

Very special to see redpolls. I haven`t seen one for years.

That sounds a lovely walk to begin a new year.

Great shots as usual. We have Kestrels here too but I dont see them very often.

Looking forward to another year of following about Edinburgh and its doings from afar!!!

It's always good to learn about traditions in different parts of the world :) Wow, that was a terrific number of bird sightings. Happy New Year!

Glad you came by at the start of things! And that you did another wander at Arthur's Seat--sounds so romantic.

I love hearing about such traditions. Here in the U.S., drinking and fireworks seem to be the "traditions" of choice. Well, and football games. But perhaps there are others I simply don't know - certainly there are for Christmas.

Some birding may be in my year ahead - I have a wonderful calendar from my neighboring state of Louisiana that shows, month by month, what can be seen, and where they are most likely to be found. If I can get myself organized, I may make a few trips to see special things, such as the songbird migrations.

Look at how BLUE that sky is - lovely shot.

The little red patch on his head is vey cute!