Sad Day for this Squirrel 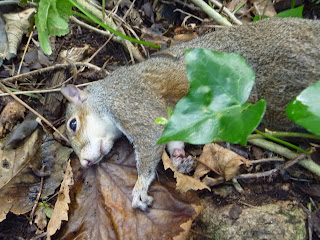 I was walking along the Water of Leith today when I heard a big commotion above my head. A couple of seconds later this grey squirrel landed at the base of the tree and lay still. I thought it might have been caught up in some creeper or something but it wasn't, but something was obviously wrong with it, because after taking a few laboured breaths, it kicked its leg in the air and then died. I took the photo when I passed by again later (I have a complicated circular walk that I do every week around Colinton Dell along the Water of Leith. The squirrel died at one of the points that I pass more than once). If you look carefully you can see that the poor dead squirrel is already being taken over by invertebrates - such as the slug climbing over its back. There was also a couple of flies buzzing about.

It was so sad to see such a beautiful creature die.

Grey squirrels are an introduced species in the UK and are often unpopular as they outcompete our native (and admittedly prettier!) red squirrels. However, in areas where there haven't been red squirrels for a very long time (like Edinburgh), the greys are a welcome addition to the local wildlife as they are such charismatic creatures.

For Nature Notes
Crafted by Crafty Green Poet at 12:55 pm

However unpopular they are, it is such a sad thing to see a living thing dead - I am such a bleeding heart that I grieve over the tiniest things.

Very sad Juliet, but thinking about it, it is not often we see a wild creature dea. They must die all the time but they are rarely to be seen after death.

Oh this reminds me of a baby squirrel I had kept as a pet when its mother abandoned him. Unfortunately I couldn't substitute the mother's role and he died. This makes me sad.

SAD...
I had a pet squirrel when I was in high school..

no I would not have liked to see this happen. Stuff like this would play on my mind. Humans don't half go on about the destruction caused by certain animals. I think we humans top that particular list

Always sad to see animals die - especially when you see it happen at the time (and not just the body later).

Mother Nature's a b ... oh I guess it's been said before.

Kind of makes one think about just how insignificant we are

That is really sad. My mind has now wondered off into wondering how the squirrel was feeling up until the moment it fell, was it the fall, or had he already died?

Really interesting point by The Weaver of Wild Grass - we are squeamish about death, but it's all part of life...

Suppose he broke his neck? Death is half of life, I suppose.

I guess everything has it's time. We usually don't get to see creatures expire unless humanity has somehow caused their death. I think it's quite touching that s/he fell at your feet and let you witness the last moments. A squirrel that certainly won't be quickly forgotten.

I wonder if he leaped and missed a branch, or if he was engaged in a fight over territory, or if he was just old. I never think of squirrels as aging animals, but that inevitability eventually finds all creatures.

Oh this is so sad...I know that the grays are a non-native species for you and that they are a problem. Maybe somebody poisoned it...

this is my patch said...

Strange there was a commotion. I wonder whether another squirrel had been attacking it before it died? x

That is sad to see. I have a lot of squirrels and have seen a few after they die and it always makes me sad.