Today we were at the Meadows Festival, one of the community festivals in Edinburgh that happen before the big festival season gets underway. After yesterday's glorious sunshine, today was dull and cool, but there was good music from local bands, a good selection of Scottish beer and a range of stalls selling locally made crafts, antiques and second hand stuff. Also an entertaining variety of dogs - for the first time there was a dog show (run by the Dogs' Trust), with the doggy dash, though not all participating dogs really did dash, some were rather slow and one sat down halfway through!

Earlier in this week, we had a bank holiday visit to the Hermitage of Braid, a nice wooded area along a stream, called at this stage the Braid Burn though it is known as the Figgate Burn at another point along its length. There were lots of beautiful ferns which made wonderful subjects for shadow shots. 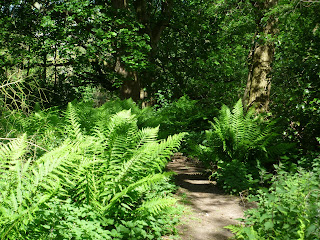 We also took a different path than usual, which turned out not to really be a serviceable path any more (it was eroded away to a tiny track on the side of a steep slope!), but it did offer us excellent views of the tree planting that is going on in the Hermitage. In areas it looks quite a mess, with the old plantation trees being chopped down (they had been planted too close and the council never made its intended income from them) and new native species being planted to recreate the original woodland. In the photo below, the small green tubes you can see in the clearing are the newly planted trees and the mature trees are the native trees that have been around for a while! 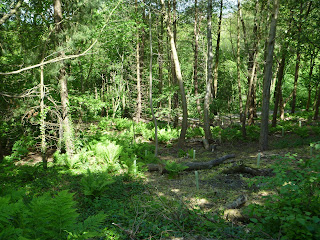 It will be a few years before some parts of the area look properly like a woodland again, but it will be lovely and overall there's still a lot of mature trees for birds to nest in. Here's one of the old trees in the area, to give an idea of the future for the area. 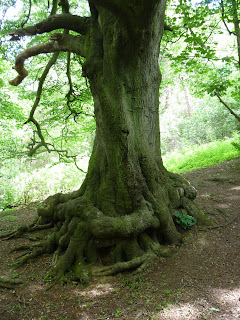 Lovely, lush green shadows and what a gorgeous, old tree! Wonderful captures for the day! Enjoy your weekend, Juliet!

How deep and mysterious are those woods!

Come here, my shadow,
Do not delay;
Be my companion,
Show me the way;
Teach me your secrets,
Chant as we go
Of light and darkness—
Make my heart glow!

Cool, deep shadows in a lush, green land. What could be more inviting?

Can I invite you to join the meme I just launched? It is called Color Connection, you can just post anything with color of your choice. Hope you can join the fun. Thank you!

Ooh, the Meadows Festival. Wish we'd known, we could have dashed!
Lovely woods, we were up Scaur Glen today and the ferns were astonishing.

Aren't ferns fun? Mine usually get burnt off from the heat of the summer sun here on the prairie, but I'm enjoying them now.
Beautiful photos, Juliet, and wonderful to see trees being planted.
— K

The forest looks as if we could be 500 years in the past. Beauty like this does not change! The sun filters through the trees, the patches of light green (in the sun) and dark green (shade) are a wonderful blend. The old growth tree looks like it has moving limbs, perhaps with human like characteristics - a stunning tree that appears very much alive...

Wow, the tree! Magical. Makes me think of "Thyrsis," one of my favorite poems.

Oh, that tree. It is incredibly gorgeous.

Thanks so much for your thoughtful comments on "Composition." It means a lot to me!

If the new trees grow to be as interesting as the last tree you posted, it will be an exceedingly lovely place to take walks.

Good to see the replanting (and had to laugh at the dog who sat down halfway).

A shadowy forest, one of the best places for a walk. Lovely shots.

Such beautiful lush greenery! I love the story of the dog sitting down halfway through the doggy dash. That sounds like something my old dog would have done :)

oh, what a storybook tree. and all the lush green. lovely shots and shadows. happy SSS.

This is exactly where I would like to be walking today instead of sitting inside while it is raining and dreary outside. Beautiful spot...so green and quiet. Love it.

Thank you for taking us on a walk with you through your photographs. What a gorgeous place.

That old tree has the most beautiful feet. I think I have a tree-foot-fetish.

Love that old tree. It's so good to see native trees being replanted. It should be lovely in a decade or two.

Lost my comment..I wish more were involved with native restoration as it is vital..Love the ferns, I want to put some in my yard in the back near the pond...

There is something about trees! I am glad that I followed your link from Shadow Shot Sunday, I too am linking up if you'd like to visit.
Hugs, antonella
My post: http://quilling.blogspot.com/2011/06/simply-sunday_11.html