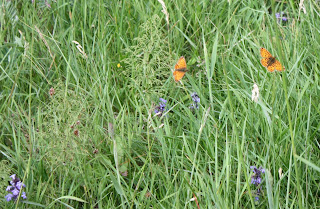 As I've said in previous posts, we saw lots of wonderful insects while we were up in and around Pitlochry. Lots of scorpion flies, shield bugs and dung beetles, a few green tiger beetles and lots of unidentifiable moths. The photo shows pearl bordered fritillaries, an uncommon butterfly, which we were delighted to see while we were walking up to Castle Dow. (Click on the photo to get a better view!). (There is a chance that they may be the less uncommon small pearl bordered fritillary, but the underside, which we didn't get a good photo of, did look like the pearl bordered fritillary itself).
.
Crafty Green Boyfriend took this photo and some amazing photos of the tiger beetles, which however he's saving for the Insect Photography competition I mentioned earlier in the week, so we can't share them here! Sorry!
.
Oh and look out for some giant ladybugs appearing later this week.....
for Nature Notes
Crafted by Crafty Green Poet at 8:50 pm

Email ThisBlogThis!Share to TwitterShare to FacebookShare to Pinterest
Thinking about: nature diary, Scotland

I thought fritillaries were flowers. I must be mixing that up with something—fritillaria? Does that sound right? Oh, Google!

Poetikat - you're right! There are also flowers called fritillaries!

I think I'd enjoy walking with you. You delight in the same sort of things. :)

So pretty :) I like seeing a bit of the nature you've enjoyed during your walks.

Very pretty they are too. Hope their numbers get a chance to recover this year. Last year was pretty dire for some of the rarer ones like these. Nice spot.

The photograph is lovely indeed. Thought first it is some sort of any image taken from the web. Very delightful to see! :)

Giant ladybugs? huh? Better not be coming out from under my bed ...

How delightful. I, too, would enjoy walking with you.

Most summers I have Eastern Black Swallowtail caterpillars on my fennel plants. I only have the fennel as a butterfly plant and let them be. We usually have several caterpillars who survive to mature into butterflies. This year I have only seen about six eggs and now they have disappeared. :-( However, I was very happy to find three argiope spiders busy at work in their webs in my iris bed two evenings ago. I have tried to get good photographs to post, but no luck so far.

The fritillaries are beautiful, aren't they?
Unidentifiable moths - yes, I know what you mean!

What a great shot of the butterflies in the grasses. I also like you nature haiku in the next post.

Great shot of the butterflies and flowers. Great sighting too, looks like a nice walk.

The scorpion fly looks formidable, and I'm happy to read he does not sting!

Good luck to hubby with the photo contest!

Love the revamped blog, Juliet. Aren't these butterflies just perfect! They seem too beautiful and delicate to be real. How wonderful to capture them on film, like most wildlife, they are camera shy..how many times do I end up with a photo of a swaying branch?!
Sorry haven't commented for a while, busy, busy times -but your blog is always a favourite to come back to. So glad you enjoyed your break and good luck with the insect photography!!
Thanks for all your comments on our posts, too :)