I suffer really bad vertigo, so Crafty Green Boyfriend often has to literally drag me up hillsides. Usually it's worth it and it certainly was on our trip to Pitlochry.

The wooded hillside walk to St David's Well in Weem Wood, near Aberfeldy is certainly very steep but beautifully lush with birds singing everywhere. There are also carvings hidden away in the bushes and wonderful rock formations and caves that were first used as a hermit's retreat, by St Cuthbert in the early days of Christianity. It is named after St David, the laird's son from Castle Menzies who occupied it when he took on an austere religious life in the fifteenth century. The photo shows some of the ferns growing around the well. 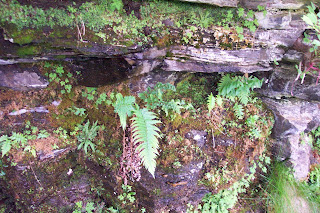 Another very steep walk took us through a forestry plantation up to Castle Dow at Sketewan between Aberfeldy and Pitlochry. Castle Dow is the site of a prehistoric hill fort. Today there are broken stone walls and a series of 19th Century cairns (see photo). There is also a sheep fold here. 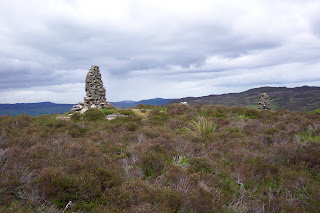 We also had a couple of pretty hilly walks up to see some waterfalls, but I'll blog about those walks tomorrow!
Crafted by Crafty Green Poet at 8:10 pm

Email ThisBlogThis!Share to TwitterShare to FacebookShare to Pinterest
Thinking about: Scotland

That must be a fabulous place to explore. Looks fascinating to me.

Oh wow, gorgeous photos, and such enjoyable walks, I'm sure. I look forward to seeing the waterfall pictures -- I love waterfalls.

Looks like an interesting place. I get vertigo sometimes myself. Towers are the worst for me. :(

I never know when it's going to sneak up on me. Great photos, and they don't cause vertigo.

Wow, what gorgeous scenery :) I bet you found plenty of poetic inspiration from this day outside.

What beautiful walks. Very similar to the countryside round Dunedin where I was born.

Beautiful photo's. I know that vertigo feeling. I remember having to be dragged along one shail path in the lakes District as i just froze and could not move. Happy Solstice to you.

wonderful photos! I especially like the colors in the photo of ferns on the wall.