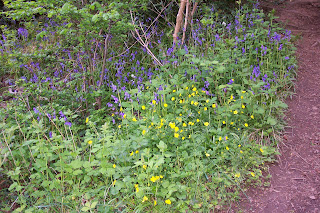 I've now been volunteering with Water of Leith Conservation Trust for a year. It has been a wonderful year of helping to look after the river, recording wildlife and numbers of people using the walkway as well as picking litter and reporting pollution incidents. The river is a wonderful place for wildlife, at the moment it is full of spring flowers. The photo above shows buttercups and bluebells, the yellow and blue juxtaposition is always one of my favourites. This time of year the woods are full of birdsong, and the first youngsters can be seen - the female mallard below has about 10 ducklings though not all of them made the photo. 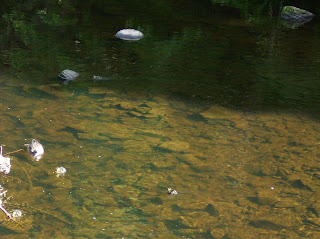 So what have been the highlights and the disappointments?
The highlights:
in the woodlands the bullfinch for its bright pink and blue-grey plumage and the fact that it seems to be thriving along the river, which is wonderful to see as it is a species that has really suffered in recent years and is only just starting to recover.
the birdsong highlight is difficult to choose - but despite it being wonderful to hear song thrushes so often (like the bullfinch they're a species that has had a bad time) I would choose the blackcap for its wonderfully rich warble (follow the hyperlink below its name to listen to its song!).
on the river today's highlight was a grey wagtail dancing in the air as it hunted for insects, it flew up and twirled several times almost directly in front of my face. What a graceful bird and no wonder the Italian's call wagtails ballerinas.
in general though the river highlight is the dipper, which must be one of the most characterful birds in the UK. I can sit and watch them for ages as they dip and bob and dive.
the nicest surprises have been the two sightings of roe deer.
the biggest disappointment in wildlife terms is not seeing the kingfishers. Other people see the kingfishers, just I don't. In the past year of looking after the river I've seen two kingfishers - one in a garden near the Union Canal (!!) and once along the River in Dumfries. So why do I never see the Water of Leith kingfishers?
The overall biggest disappointment is the amount of rubbish people leave along the river. The worst thing being the disgusting habit people have developed of wrapping dog poop in plastic bags and then throwing it into the trees or piling it up by the side of the path. Dog poop is biodegradable, if you can't bag it and bin it, just make sure your dog leaves it out of the way of the path and it should be fine!
But the Water of Leith Conservation Trust has a large team of river patrollers (like me) and conservation and clean up volunteers who take part in regular big clean ups to keep the river looking nice for the many people who walk and run along it and helping to keep it a healthy environment for the wildlife. If you live in Edinburgh or along the route of the river, its a great way to spend time outdoors and to feel you're being productive. If you live elsewhere perhaps your local river has a similar conservation trust looking after it?
Crafted by Crafty Green Poet at 11:36 am

the river flows--
looking back in time
old photos

Lovely post - you describe the river and its wildlife well (the names of animals and plants are delightful to say out loud too). And it's great that you're helping to maintain the area.

When I read Leith though, the first thing that came to mind was the River Lethe (though I'm pretty sure they'd be pronounced differently).

And congratulations on your book launch.

I've never yet walked along the river, only been to a couple of small parts of it, but no walking. May have to do that some time. It would be lovely to see all the wildlife.

I did a huge clean up here in the local green space a couple of months ago - just me and my mum with 4 huge bin bags. What seemed visually, like only a bag of litter, turned into over 4 huge bags! including an overcoat, a briefcase, a small table and ofcourse a traffic cone! I was hoping that the blackbirds may get at the worms better with all the rubbish out the way. And the only person to say anything to us out of the 10 that passed by was an old American chap and he thanked us! Isn't that nice! The Americans are always thankful!
so thanks Juliet - for your invaluable work on the Water of Leith!

Lovely post.
Litter makes me want to tear my hair out, in urban or rural areas - why do people do it?
And when you see that intense flash of blue that is a kingfisher, it actually feels like you've seen magic.

In Florida, the state employs (without pay, of course) prisoners to clean up the roadways. Volunteers, usually trail enthusiasts and Audubon Society members, help keep the waterways neat. It always seems like a losing battle against the slobs who think the whole world is their personal trash bin. I think the problem has to do with upbringing. Trashy parents raise trashy kids.

They throw bagged dog poop in the trees here too. Must be some poo-flinging habit from our primate past.

1. Do you believe your efforts are worthwhile? Some of our programs here seem to make people feel good for doing them, but no change for the better is observed in the environment!

2. How do you report pollution?

3. Here there is an unending campaign to have people pick up and dispose of dog poop. Lots of baggy stations and garbage pails. Too close to the water and in it goes in the rain. We have recreational and commercial shellfish at the mouths of most rivers and streams here and that stuff is bad. It is also a nutrient which promotes excess algae/weed growth.

4. Bless you for getting out there too! Puget Sound Starts Here (Our Slogan) but it starts there as well.

I loved these pictures and your observations!! A Mary Oliver moment (in the best way possible).

Hey, a big congratulations on your book launch! So glad that the reading went well...yes, a longer, less formal reading seems to be better.

i can't believe people throw bagged dog poo into the trees. that's a tragedy not to mention a hard cleanup. i commend you for your job walking along Water of Leith. i've enjoyed seeing your photos and reading your caring words. hope all is well. have a great day.