We had a lovely few days in Dumfries. We stayed in the wonderful Friars Carse country hotel, which sits five miles outside Dumfries in its own extensive grounds along the river Nith. While walking through these grounds we saw kingfishers and dippers and had a very good view of a lively red squirrel that ran up and down a few trees for our entertainment (note to non UK readers, the red squirrel is the native UK squirrel which is being driven out of a lot of its areas by the alien grey squirrel, so its alwayas a joy to see one!). We also enjoyed watching the stars, the skies were incredibly clear and free from air pollution. One starlit night we enjoyed listening to an otter hunting nearby in the river. 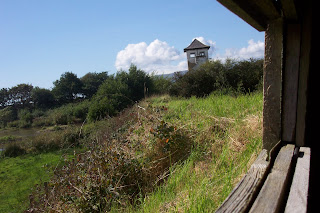 Caerlaverock Farm tower from one of the reserve hides

Our first trip while in Dumfries was to Caerlaverock, another Wildfowl and Wetlands Trust reserve, but different from Martin Mere in that it only has a reserve area for wild birds, and no collection of captive birds. The weather was glorious while we were there. Telephone wires near the reserve were heavy with swallows, house martins were dashing around the farm tower at the centre of the reserve, one pair were even still feeding young! The wildlife garden was full of butterflies. We walked round the whole reserve, not many geese and ducks around as it was too early for them to be arriving for their winter stay. We did see little grebes, wheatears and whinchats and lots of dragonflies and spiders.

Email ThisBlogThis!Share to TwitterShare to FacebookShare to Pinterest
Thinking about: nature diary, Scotland

Sounds wonderful. And you had such a blue sky to ramble beneath!

I would have loved to heard the otter hunting nearby. I think otters are so cute. Great picture.

Watching the stars in these grounds sounds idyllic!

Thanks for visiting my blog. I see there is still so much of the world to visit. It looks like you live in a beautiful area.

Oh this sounds lovely. One of the places where I lived when I was child had otters. They would come up on the boats looking for food.

Love your header!
Can't get over the huge variety of birds you have. Have seen otters at the sea-wall here. Their antics are hilarious.
A beautiful area you have showcased this post.

What a lovely area you stayed in!
The farm tower and the blue sky look great! September is a great time, isn't it?

Beautiful and peaceful. Great for relaxation and inspiration.

Sounds pretty perfect to me! A great way to spend a few days, indeed.

Oh, it sounds so lovely, Juliet! So glad you got some time away!
:)