It was very hot at lunchtime today, which probably explained why Crafty Green Boyfriend and I were the only people wandering round Corstorphine Hill at that time.

Despite the heat though we managed to see a lot of wildlife! We were pleased to see several species of bees buzzing around, specially on the thistles (thanks Crafty Green Boyfriend for this photo, if you click on the photo to enlarge it you might even see the bee's tongue) 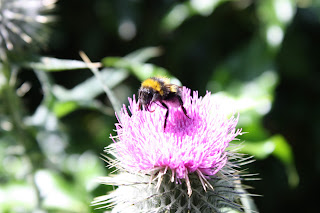 Lots of ringlet butterflies were flying about in the neadows.

Whitethroats were singing in the meadows, while in the woodland we got a very good view of a male bullfinch while two blackbirds were chasing a raptor of some kind (we never got to see the bird of prey, other than as a blur od large wings in the middle of the trees).

Most exciting though was seeing nuthatches high up in a tree, an adult feeding a youngster! Nuthatches have only recently started to move up into Scotland and this is the first time we've seen them in Edinburgh apart from on the bird feeder outside the Ranger Building in the Hermitage of Braid, where they seem to have spent the past four years or so.

Love the bee on the thistle, a great capture! Congrats on the Nuthatch sighting! Happy weekend to you!

Busy bee! Sometimes we have a nut hatch or two at the feeder, sometimes not. Not this year.

Thistles and bees...hmmm a quilt idea just hopped in my head.
Love this photo.
xx