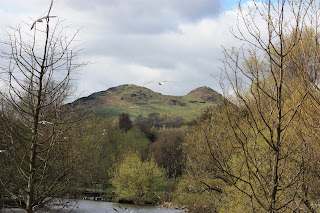 We had a lovely wander round Figgate Park in Edinburgh today. We'd never been before, but had heard (via Edinburgh Wildlife) that it was a good place to see Shovellers, a species of duck that we don't often see round Edinburgh. And indeed we did see a pair of Shovellers, and as you can see from this photo, they're very handsome ducks, or at least the males are, the female looks much like a female mallard (and there were plenty of those around too). 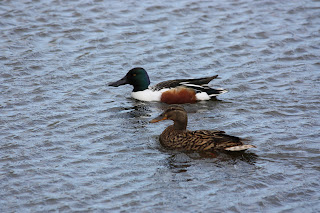 We also saw three nesting coots, several tufted ducks (those in the photo below are males) 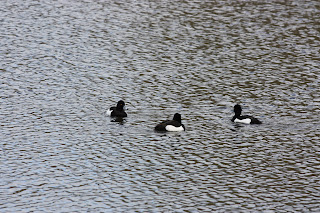 and a cormorant, looking slightly out of place, as it is more usually a shore bird. Also Canada Geese, mute swans, herring gulls and black headed gulls (some of which had their summer heads, some were still with their winter heads). There were lots of goldfinches flying around in the trees too. Parts of the Figgate Pond have been recently planted with wetland plants and a boardwalk has been put in, which offers a nice route over the pond.

The photos in this post were taken by Crafty Green Boyfriend. I took some photos too, but my camera battery is currently recharging and I'll post them next week.....

As ever, red text in this post takes you to other webpages where you can find out more.
Crafted by Crafty Green Poet at 3:09 pm

Looks like a pretty place for a birding outing. The male Shovelers are pretty. I would love to see the Tufted ducks. Great post and photos.

you have such beautiful areas to explore and so much wildlife. i always enjoy stopping by to see what's new. have a great day.

You have some good ducks in Scotland! We get cormorants quite a long way inland here.

Looks like a lovely place to visit. I love to see waterfowl on lakes and ponds - their calls are so evocative and almost mystical, but somehow amusing too!

It is amazing to me that you have many of the same bird species as we do in the States, especially here in the northeast. It really looks like you had a wonderful time. What a wonderful place to have so close to where you live.

Cool! Glad you got to see them. They are so awesome, no? :D
I remember the first time seeing them flying overhead and I was wondering what the heck they were :)

Sounds like another lovely day out for a walk, and great photos by Crafty Green Boyfriend :) I always enjoy seeing birds posted so that it's easier to identify them when I come across them.

Sounds like you had a lovely time - love the bird watching! And yes the shoveler female does look like a mallard female!

Lovely shots. Nice to meet a fellow bird lover, poem appreciator. Thank you for dropping by my site.

SCOTLAND is the most beautiful country in UK. I visited 2 times and I want to visit again...congrats for the texts and also for YOUR COUNTRY...AND ITS BEAUTY
NICE DAY
http://graceolsson.com/blog/2011/04/impressions-of-argentina/