The Eagle's Way by Jim Crumley 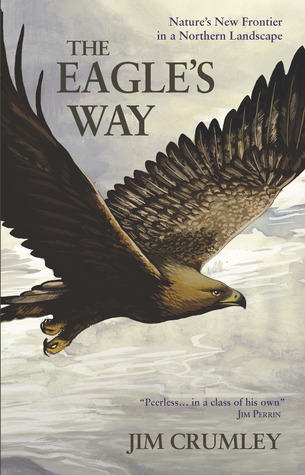 Subtitled Nature's New Frontier in a Northern Landscape, this is Jim Crumley's study of eagles in Scotland.

He starts the story at the Tomb of the Eagles in Orkney, where he considers the age-old relationship between humans and eagles. Back in the day, sea eagles were much more common than golden eagles in the British Isles, and were revered by the folk who lived here in ancient times. Fortunes changed and the sea eagle became extinct in these islands in 1918. They were reintroduced in 1975 and have made something of a comeback since then. Crumley has travelled across Scotland searching for eagles and this book focuses on how these magnificent birds are faring today.

Crumley offers us insights into the ecology of both species of eagles and describes awe-inspiring encounters with eagles in the wild, as well as with other wildlife seen while searching for eagles. It is particularly heartening to read how people living on the island of Mull have really taken the sea eagles to their hearts and celebrate their presence (this may be partly due to the eagles bringing a huge boost to the island's economy by encouraging tourism).

The author is scathing about the opposition shown by some people to the idea of reintroducing sea eagles into our country:

"..how wide the gulf has become between our everyday lives and the everyday lives of nature, how impenetrable our lack of understanding has become since we annihilated the big predators. And now that a new predator has been restored to a landscape where we never expected to see it, because most of us never knew it had ever existed here, the truth is we don't know what to do with it or how to responds to it in a way that is relevant to the twenty first century rather than the nineteenth."

This is an interesting book for anyone who is interested in the wildlife of Scotland. My only criticism is that much of Crumley's writing is overly flowery. Some people love his style, but often it annoys me.

The Eagle's Way by Jim Crumley, published by Saraband.

You can read my reviews of other books by Crumley by following the links below:

The Nature of Autumn.

The Nature of Winter.

Crafted by Crafty Green Poet at 8:28 am

Interesting review. I agree about flowery writing - it is suited to some books but not the kind of book this sounds to be.