Spring Greens in the Dells and a word about foraging

Craiglockart and Colinton Dells alongside the Water of Leith are a mass of green at the moment. In places this is entirely due to the thick growth of ramsons (wild garlic) as in the photo below 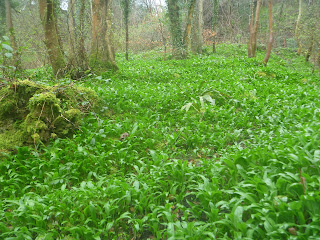 Though if you know your British ferns and look very carefully you may notice a beautiful hart's tongue fern in the middle of the ramsons!

In other places however, few flowered leek is taking over from the ramsons 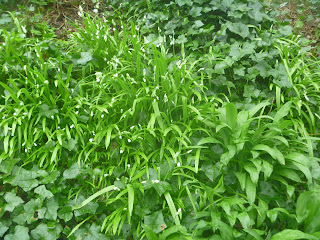 Few flowered leek is superficially similar to ramsons as you can see from the photo above. However, the leek has narrower leaves and is already in bloom, while the ramsons won't bloom for a while yet. Few flowered leek is classified as an invasive plant and in some places ramsons are disappearing from the British countryside. This isn't just because of the leeks though, but also because people are taking up foraging in a big way. Now, one couple picking enough wild garlic once a year to make a nice pesto isn't going to do any harm, but the foraging now goes on at almost industrial levels. In the past three weeks I've seen three sets of people filling carrier bags with ramsons in the Dells alone. There's still a lot of ramsons in the area, but there's definitely a lot more leek than there used to be. I've read that in parts of Scotland, there are now almost no ramsons left due to over foraging. The best solution? Forage the few flowered leek instead! It doesn't taste as strongly as ramsons, but it's perfectly edible and makes a nice pesto too.

Unlike ramsons, wood anemones seem to be spreading in the Dells. They weren't open yet today when I walked past, as it was dull and chilly and damp 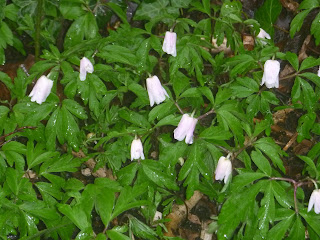 The larch flowers though never close and just continue their slow steady progress towards becoming cones. This is how they look at the moment 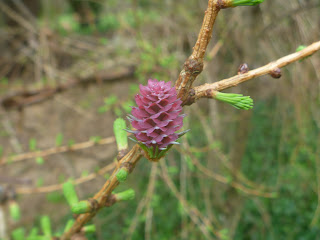 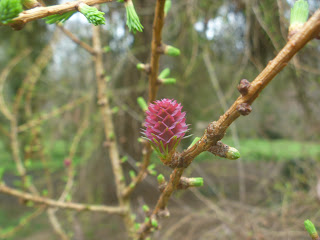 I am not one for foraging as even my old eyes don't cooperate anymore....

Interesting to see them in pre fullness. I thought they'd be different to be honest. The long shape and then bloom, not bloom and grow as they go...#NaturesNotes

It's beautiful Spring in the Dells~ Thanks for sharing it.

These are lovely images. I enjoyed the information you provided, too.

Hi Michelle - I'm not one for foraging either (except for raspberrles!)

Lydia, thanks for visiting, sadly Blogger won't let me leave a comment on your blog, but i liked your photos of the gum nuts!

Thanks Sallie and Betty!