The giant redwoods of ... Edinburgh!

I'm continuing my job of carrying out wildlife surveys of all the cemeteries managed by Edinburgh Council. Today, I eventually found Wauchope Burial Ground - coming down Greendykes Road from the main road, you entirely miss it, and it's only when you turn round and go back up the road that you see it. It's a tiny cemetery, originally a family graveyard that was put under Edinburgh City Council management when the owners sold the surrounding land for housing to be built on it.

This is a tiny green oasis, mostly surrounded by housing 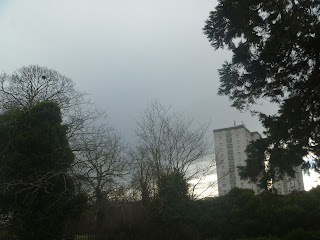 The family who had originally established this graveyard planted two giant redwood trees (you can see part of one of them on the right-hand side of the photo above and in the photo below). 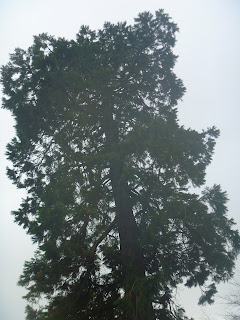 I'd heard that tree-creepers like to make roost sites in the soft bark of these trees and sure enough, if you look carefully at the trunk in the photo below, you may be able to see a series of indentations in the bark, which may well be roosting sites for tree-creepers. 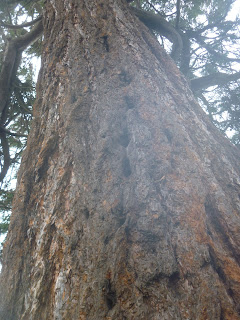 Sadly, I didn't see any tree-creepers during my visit, though I did see a goldcrest (Britain's smallest bird and one whose song sounds very like that of a tree-creeper).

The grass was scattered with beautiful cones from the redwood trees. so I placed a few on a lichen encrusted gravestone to take some photos 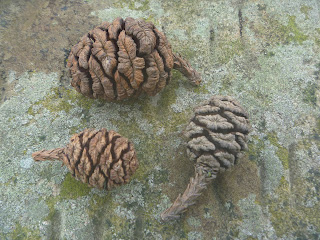 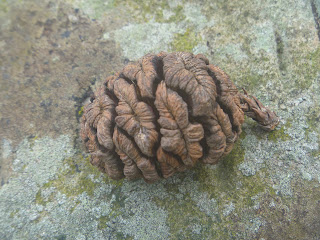 Even more difficult to find than Wauchope Burial Ground is Gogar Cemetery which I (finally) visited on Friday. I had originally tried to get there by bus, but failed totally to find it, as there is no sign of it from the road that is named in its address. I eventually found out that it's very close to the Gogarburn tram stop, but even then it's not immediately obvious and the church is now a cabinet maker's workshop! I don't have photos of this small cemetery, unfortunately.

Email ThisBlogThis!Share to TwitterShare to FacebookShare to Pinterest
Thinking about: cemetery wildlife, In and around Edinburgh, photos, winter

I never imagined redwoods there. I thought they were a California specialty!

Hi Luanne, yes, redwoods are naturally a California speciality, but plant explorers brought the seeds over here and planted them in a few places, mostly the grounds of stately homes etc. They did the same with quite a few American trees

The Redwoods are beautiful. I have the giant Redwoods in California.
Sorry you missed seeing the Treecreeper, the Goldcrest is a pretty bird.
Have a great day!

We have tree creepers here too... Yes that was a species of hover fly but I don't know what species....Michelle