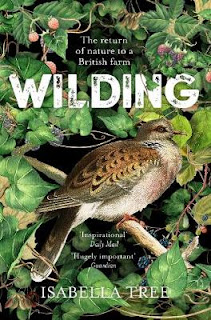 Isabella Tree and her husband, Charlie Burrell, manage Knepp Estate, a pioneering re-wildling project in the south of England.

Wilding is her inspiring story of how Knepp developed from underutilized farmland to a wonderful and creative wilderness area that still brings in income from farming and other activities. It is an in depth investigation of the practical steps taken to rewild the estate against the background of some of the recent catastrophic declines in wildlife in the UK.

"The key to Knepp's success... is its focus on 'self willed ecological processes'. Rewilding is restoration by letting go, allowing nature to take the driving seat." and it has certainly been successful in this case, as species that are rapidly declining in other areas of the country are thriving here, including nightingales, turtle doves and purple emperor butterflies. Other species are thriving too, just one example is the fact that 23 species of dung beetle were found on one cow-pat alone!

Some species have turned up in unexpected places, such as the purple emperors thriving in areas of sallow scrub, which had never been considered their preferred habitat. This type of discovery indicates that perhaps we still have a lot to learn about the ecological preferences of many species and supports the point of view that rewilding is best for nature. (Though personally I think there are sometimes good grounds for managing a specific habitat for specific outcomes).

Much of the estate in its rewilded state has become woodland pasture, which Tree tells us in the narrative is the primordial vegetation type for much of the UK. She quotes from pollen analysis research to support this statement and brings up some fascinating insights into historical ecology.

The book also loos at ecological approaches to managing flooding, the importance of healthy soils, the value of scrub as a habitat for wildlife, the benefits of ragwort  (a much vilified but actually ecologically valuable plant) and the positive impact nature can have on human health and well-being.

Read here about how the future of the wildlife on Knepp might be threatened by housing developments in the immediate vicinity.

Crafted by Crafty Green Poet at 8:47 am