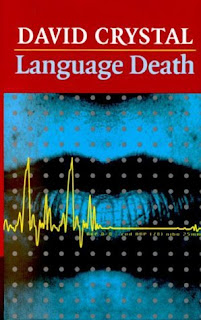 This is a fascinating and sobering investigation into the issue of endangered languages.

From the point of view of this blog, the most interesting thing about this book is that it looks at language endangerment from an ecological viewpoint. Linguistic diversity is as important culturally as biodiversity is to nature, yet very few people see it that way.

The book examines how languages have evolved to suit specific environments:

'...indigenous communities have developed a hugely diverse set of responses in lifestyle as they relate and react to the many differences in local environmental conditions. And it is language that unifies everything, linking environmental practice with cultural knowledge'

The loss of a minority language can mean the loss of a unique way of looking and relating to the world. If people lose their native language they risk losing their connection to their land and their community's inherited knowledge about the local ecology. Biological science too has learned from this knowledge, Kunwinjku, an Aboriginal Australian language for example, has vocabulary that can identify different species of wallabies by the way they hop - a fact that has recently been 'discovered' by computer analysis of moving wallabies.

The book also shows how environmental factors can contribute to language loss, for example, famine or other environmental disasters can cause small populations to collapse as people migrate away from their homes in search of safety. Often a language with only a few speakers can't survive such an impact and is pushed closer to extinction.

The second part of the book focuses very much on how field linguists can effectively and sensitively help local communities to preserve their languages and pass them on to the next generation.

Crafted by Crafty Green Poet at 11:11 am

Sounds like an interesting study even though beyond where I might be interested in going. How does this feed into the English/Gaelic split, where it seems there has been a resurrection of the Gaelic language in Scotland?

Hi Jeff, Gaelic is a struggling language, though it is spoken widely in certain parts of western Scotland and there's recently been a big surge in people learning Gaelic. Whether that actually leads to more people speaking it in everyday life is a different thing.