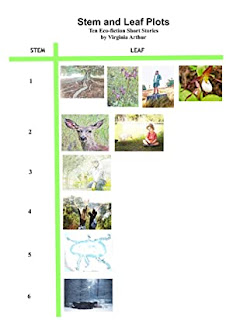 (Stem and Leaf Plots are a type of distribution table used in statistics, the cover and title of this book are a play on this).

This collection from Virginia Arthur explores the relationship between humans and nature. Stories look at issues such as the mental health benefits of spending time in nature, conflicts between housing and wilderness and recreation vs nature conservation in wildlife areas. Despite focussing on such weighty topics, the stories are engrossing tales, moving, amusing, enraging and hopeful in turn.

My favourite is the heart warming Doe. Will has retired and moved in with his daughter and son in law. One day while walking on a trail nearby he has a wonderful encounter with a young deer and meets two other lonely people and together they bond over looking after the fawn. It's a lovely story of how caring for nature can bring people together. Lame Duck is similar in theme. Brady, a 6 year old boy leads an expedition to save an injured goose in a local park and ends up changing the lives of those around him and as a result his home situation improves immeasurably.

A Strangler Fig (Ficus macrophylla) Grows in Eden is notable for featuring an older female protagonist (as does Arthur's novel Treed which I recently reviewed here). Rowena is an angry 68 year old in battle against a large tree on her property that threatens to destroy the pavements, it's a story about ageing, regrets and the persistence of nature. Restoration Ecology also focuses on the persistence of nature. Mira, a grad student at a botanical garden working on lady slipper orchids revisits her study plot of wild orchids 30 years on, will there still be any orchids?

It's So Lovely to Live in the Country (A constantly repeating true story) outlines one couple's war against nature to try to make their rural home 'perfect', representing an all too depressing reality in many places. All Forces Maligned (Driving Nora Home) also highlights the disconnect many people feel with nature. At heart it is about two very different sisters, nature loving Carole and her older sister Nora, who is indifferent to nature, their relationship going under the microscope as they  go on a short road trip together. Their different attitudes to nature are summed up in this exchange:

'Walking down the dirt drive to the truck, Carole remarked, "there's nothing wrong with the spiders. In fact, from the casts they leave behind, Rob and I calculated they kill at least 30 insects a week."

"Oh God," Nora carped. "Please stop." Nora continued her conversation with the windshield. "You and Rob need to get out more. You sit around and count dead bugs." She scoffed.

Leaning down into the open window to look at Nora, Carole continued, "the spiders help control the bugs, Nora. We--"

Bugged is an entertaining story of rivalry that extends beyond the grave.  A dead entomologist leaves an address to be read at his funeral in which he compares his family and his biggest academic rival to various insects. It's a neat way to draw comparisons (both positive and negative) between human nature and insects and to make the latter seem more relatable to people who would normally overlook them.

Arthur justifiably tends towards a dark view of the current state of the human relationship with nature but balances that with an optimistic view of how we can still turn things round. These stories are readable and thought provoking.

Stem and Leaf Plots - Short Stories by Virginia Arthur, can be purchased via the links on the author's website.

You can read my reviews of Virginia Arthur's novels by following the links below:

Crafted by Crafty Green Poet at 10:03 am

Good that there so many nice stories like these .. all is not lost!

Your account of the strangler fig reminded me of a book I was reading last night -a Camilleri Montalbano novel, in which the inspector smashes the windows of a newly built house because the builders had chopped down an ancient olive tree to build it.