The Big Necessity by Rose George 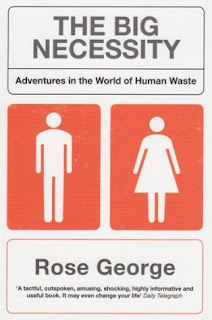 Subtitled Adventures in the World of Human Waste this is a fascinating, entertaining (and sometimes disgusting) examination of the history and current situation for sanitation across the world.
We're taken on a tour of underground sewers in London, fields used for open defecation in India and various public conveniences across the world. The author examines differing cultural attitudes to human waste and to toilets themselves - why have only the Japanese really embraced the idea of the high-tech toilet and why do Western nations so prefer toilet paper rather than rinsing despite the former being considerably less hygienic? Along the way we meet campaigners, sewage engineers, toilet designers and politicians.
Sanitation is shown to be an essential - cholera, the best known water borned disease kills vast numbers of people in developing nations every year - yet one that is largely ignored at policy level. Four in ten people across the world still lack a toilet yet sanitation campaigns often fail due to trying to impose toilets on people who aren't used to them rather than working with communities.
Are we right though to consider human faeces as waste? The book also examines how human waste can be used to generate biogas for cooking and heating or treated so that it can be safely used as compost, as well as examining the dangerous practice of spraying untreated sewage on crops.
Throughout the book there are fascinating facts such as Jennifer Aniston using a body double in a scene where her character was cleaning a toilet!
This is an essential look at the world of sewage and the health and environmental issues associated with it. Just don't read it while eating.
The Big Necessity by Rose George, published (2008) by Portobello Books (now part of Granta Books).
**
You may also be interested in this article on the Rapid Transition Alliance site about links between COVID_19, toilet paper shortages and sanitation.
**
On an unrelated topic, I've delighted to have two poems published on the Plum Tree Tavern site, which you can read by following the links below:
Mayfly Time.
Leopard in Balance.
Crafted by Crafty Green Poet at 1:52 pm

The poems are lovely, Juliet.

Not that I wanted to change the subject, or any thing.