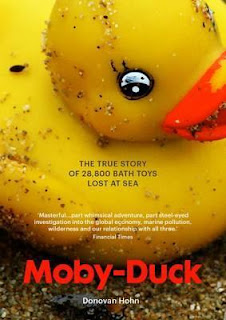 On 10 January 1992, a container ship sailing out from Hong Kong hit bad weather and lost many of its containers including one that was full of plastic bathroom toys (beavers, turtles, frogs and, most famously, ducks).

Written in 2011, this is the account of how Donovan Hohn tried to trace the story of those bathroom toys and follow their journeys across the world. Taking in the production of plastic toys, the science of ocean currents, climate change and plastic pollution, this is an adventure story as much as a journalistic investigation. It also (unsurprisingly perhaps) makes frequent reference to Moby Dick.

The plastic toys are really just a hook for this book, which is less about plastic pollution than I had hoped and more about the author's experience of travelling the oceans. It's interesting and well written but not as focussed as it could have been, though there's certainly a lot of interesting material here, investigations into the so called Garbage Patches in the Pacific Ocean, accounts of scientific investigations into ocean currents and the effects of plastic pollution on ocean ecology.

The scary thing is that many of those original plastic toys are probably still floating round the oceans, gradually being worn away by ocean currents and the eroded pieces of plastic being ingested by ocean animals. Even more scary is the fact that these plastic toy animals are only a fraction of the items lost at sea, adding their weight to the mass of pollution we add every day to the seas.
Moby Duck by Donovan Hohn, published (2012) by Union Books.

Crafted by Crafty Green Poet at 8:05 am

This sounds as a good read, even despite some limitations. Containers are efficient but easily lost in weather and are deadly to sailboats. I didn't know they were as a bad as they are until my daughter was telling me about where they tried to get containers loaded for transatlantic shipments--they try have their containers inside so it isn't lost crossing the sea (so they don't want it loaded at the last port of call in Europe).