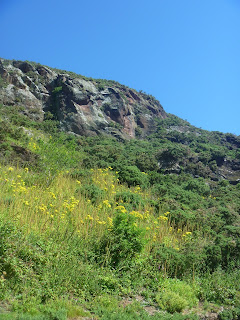 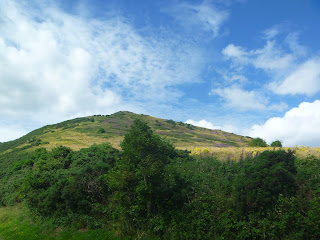 We had a lovely walk on Arthurs Seat today. It was beautifully warm and sunny so we thought it would be a good place to try and see some butterflies for the Big Butterfly Count (which ends tomorrow). We were lucky to see several butterflies, including a red admiral and a couple of meadow browns, though only this small copper allowed us to take photos 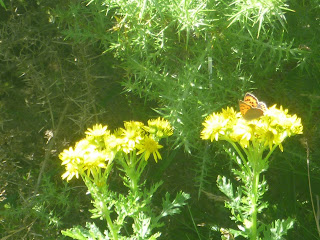 Many of the ragwort plants were covered in cinnabar moth caterpillars 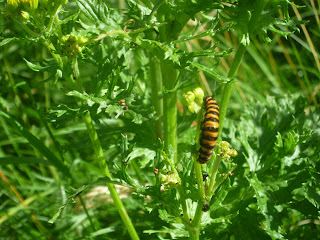 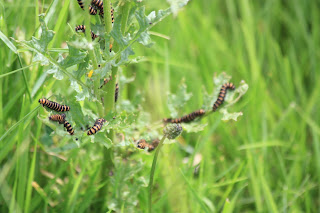 Yet oddly, neither of us have ever seen adult cinnabar moths on Arthurs Seat!

Another insect that was present in good numbers was this species of solitary bee, I'm hoping that I'll be able to identify it eventually, but it is a very handsome little creature, as Crafty Green Boyfriend's photo shows 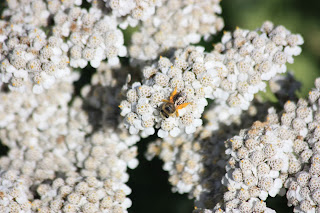 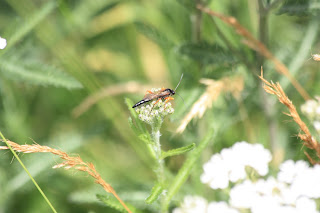 We also saw several ladybirds, which was nice as we've not seen many so far this year. This one seemed to be quite comfortable in the thistle 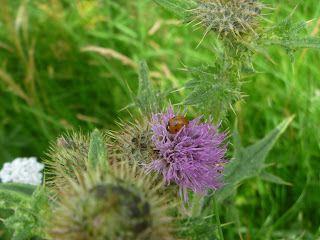 Meanwhile up in the sky, this pair of ravens was dancing and calling, a wonderful sight (and thanks to Crafty Green Boyfriend for this photo too!). It's been a while since either of us have seen the ravens, for such large birds they're surprisingly elusive! 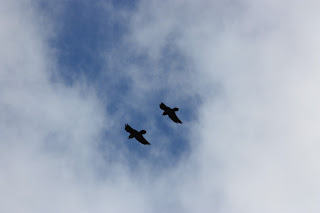 Plenty of other birds around too, including lots of house martins, a flock of about 30 goldfinches (a veritable charm of them in fact!) and this magpie, who was more than happy for Crafty Green Boyfriend to take its photo. 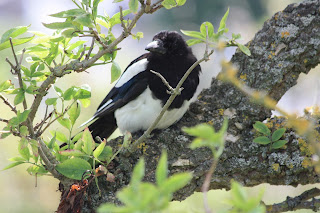 As ever, coloured text contains hyperlinks that take you to other webpages, where you can find out more

You got some really good shots on your walk. Is that trail close to your home? I know you go there often.
The western part of the United States has magpies, but none here in the East.

It certainly looks a beautiful day, that blue sky is a giveaway!
Some lovely photo's here, especially the photo of the magpie.

Looks like you had a wonderful day out and enjoyed seeing your beautiful nature photographs.
Happy Sunday
hugs
Carolyn

Hi Sandy, yes, Arthurs Seat is just a short bus journey away from where we live, on the other side of Edinburgh

Lowcarbteam and Draffin Bears - thanks

Hello, what a pretty day for a walk. Love the nature images. Happy Sunday, enjoy your day and the new week ahead!

So beautiful to see ravens dancing in the sky and your walk was a beautiful one with a view on Arthurs Seat. We also have our National Butterfly counting today, and.....this morning I still knew it and then we went out for a bike ride and....I forgot it, stupid. Well, may be I count them tomorrow just for myself.
Regards, Janneke

I enjoyed the over all shot of the hill accompanying the micro shots. Looks like a nice morning.

Lovely photos - didn't realise you had magpies over there!

Some lovely and unusual sightings in a wonderful place, Juliet. The wood wasp is very striking. We saw another ruby-tailed wasp yesterday - I must see how long their season lasts. The first 'hover round the table' common wasps appeared here on Saturday ... and, I'm afraid, they are an insect I am not so keen on as they always make a beeline (waspline?) towards my face.

Hi Caroline, yes we were very impressed by the wood wasp, no idea yet which species it is yet. I agree with you about common wasps, they're okay one at a time in Spring and early summer but now is the time when they start to be annoying....

Just lovely - I'd enjoy that walk, so glad I get to enjoy it through these photos.

Great photos. I meant to climb Arthur's Seat this year but didn't have the energy. My older son did while the rest of us rented a car for the rest of our journey. He got the better outing certainly. I have definitely fallen for Scotland.