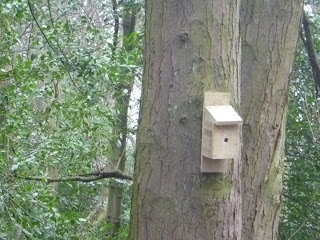 This morning I was helping Water of Leith Conservation Trust put up some nest boxes in Colinton Dell by the river. We had boxes for blue tits, great tits, wrens, treecreepers and a single, very optimistic box for spotted flycatchers.

As far as I know, spotted flycatchers haven't been seen in Colinton Dell for ten years or more. I've only ever seen these lovely birds on the Isle of Arran (where they fly around a beer garden outside a brewery) and in Biggar, Lanarkshire (where they fly around quite happily in a caravan park!). So they're obviously not afraid of humans. I found out today that spotted flycatchers are actually doing quite well in Roslin Glen near Edinburgh, so maybe the birdbox we put up today will tempt them back into Colinton Dell! It would be lovely to think so!

I'm looking forward to keeping an eye on the boxes to see if any of them become occupied. I know that most birds will have chosen a nest site by now, or at least have started prospecting for potential sites. So it's unlikely that any of the boxes will be occupied this year....

I'll try and keep you updated on this blog!

As ever, red text contains hyperlinks that take you to other webpages where you can find out more.
Crafted by Crafty Green Poet at 5:32 pm

We look forward to hearing more. We used to love watching the Spotted Flycatchers in Carmarthenshire!

Oh I think I passed by The Water of Leigh Conservation Trust. Unfortunately it was closed because it was the end of the year, it was a marvellous walk.

It will be neat to follow the progress of the boxes. I hope they are all filled with birds and maybe the flycatcher. Have a great weekend!