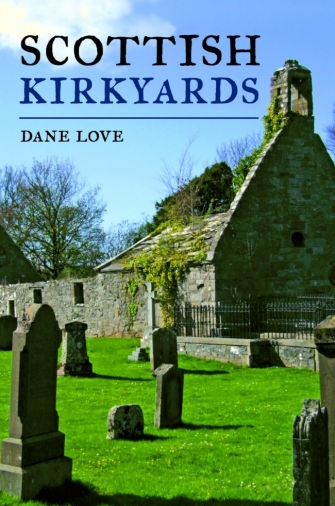 Scottish Kirkyards offers an introduction to the history of Burial Grounds in Scotland. The book starts with examining what is known of burial rites in prehistoric and early historic times, looking at structures such as the chambered cairns that are still to be found in some prehistoric sites.

The book focuses on historical kirkyards, which are burial places associated with Christian churches, highlighting the kirkyard as a place of rest, while also looking at the information that can be gleaned from gravestones that indicate details such as occupation and cause of death of the people buried there. Other chapters look at epitaphs, stories from cemeteries and a brief history of the body snatchers that used to dig up bodies to sell on to medical schools.

Although the book doesn't focus on nature in kirkyards, the topic is mentioned a few times, including the fact that kirkyards are undisturbed by agriculture and so are often home to plants which may be relatively rare outside the kirkyard. Yew trees are discussed as symbols of immortality due to the great age they often reach (the Fortingall Yew, which grows in a kirkyard in Perthshire is reputed to be over 3,000 years old.) Rowan and holly are also considered to be holy trees and are often found in kirkyards.

Not all burial grounds are kirkyards of course and this book makes mention of the Victorian Garden Cemeteries, of which there are several in Edinburgh (including North Merchiston Cemetery, our local cemetery, where I'm on the committee of the Friends Group). When they "were first established these were looked upon as great parks commemorating the dead, places where one should walk along the paths and learn from the example of those who had gone before... A fair number of these 'gardens of death' were laid out on hills, so that the path meandered up the slopes to a prominent viewpoint, which added to their popularity for walks".

This book, with copious illustrations and photos, is a fascinating read for anyone interested in Scottish kirkyards.

Scottish Kirkyards by Dane Love, published by Robert Hale (1989) and republished by Amberley (2010)

My grandmother lies in one in Kirkcudbright

Fascinating! Thanks for posting this.

The book sounds interesting. I am assuming that in Scotland, like the US, fewer and fewer people are being buried with the hole body and more are being cremated.

Thanks Gershon and Jeff.

Jeff, you're right, more and more people are being cremated here.