Usually when I give guided walks, at least some people in the group have never been to that particular location before. This week, however, I have been introduced to two new gardens in the course of guided walks I've led. The first of these was the Archivists' Garden, nestled between Register House and New Register House at the east end of Prince's Street. 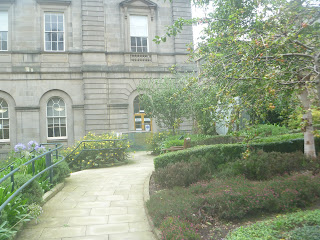 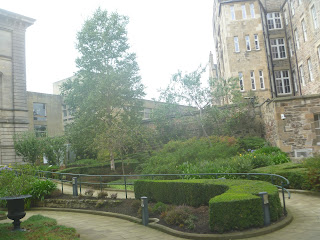 There is a useful noticeboard in the garden (and similar information on the garden's website) but although all the species of plants in the garden are listed, I can't seem to find anything that matches specific plants with their specific link to Scottish history.

The garden is only open during office hours (9-5, Monday to Friday) but is a lovely place to have a wee seat during your lunch break.

The second garden that I only discovered this week is the Physic Garden at Holyrood Palace. 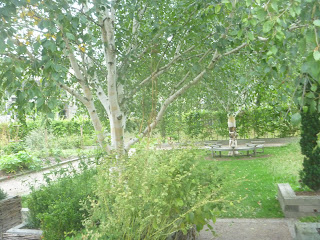 When Mary, Queen of Scots lived at Holyrood Palace in 1561, there were a number of private gardens, including a walled garden, which was developed into the physic garden in 1670. The physic garden measured just four square metres and was planted with around 90 medicinal plant species. This physic garden was the original precursor for the Royal Botanic Gardens, now situated in the Inverleith area of Edinburgh.

The current physic garden at Holyrood Palace was established in 2020 and has raised flowerbeds laid out in a geometric pattern, reflecting the design of early botanic gardens. The garden includes medicinal plants that would have been grown in the 17th century. Alongside the physic garden, a flowering meadow evokes the 15th-century monastic garden of Holyrood Abbey. This has recently been mown, but will look beautiful again in Spring and Summer. 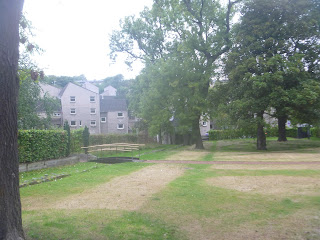 You can find out more about the history of the Physic Garden at Holyrood Palace here.

There is a brief history of all the historic physic gardens in Edinburgh on the Royal College of Physicians Website here.