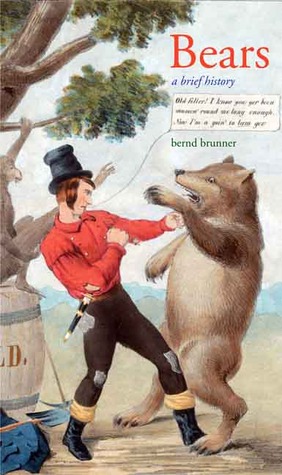 This short book, packed with historical illustrations and photos, is a brief history of bears and their relationships with humans.

The book starts with a brief look at the different species of bears alive in the world then looks at different aspects of our relationships with them going back to how stone age humans may have interacted with the cave bear.

Brunner examines how humans have interacted with bears, from hunting through shamanism to domestication, cuddly toys and circus performances. He doesn't shy away from describing how cruel humans have been to bears, even while exploring all the things that draw us to bears, their faces and their ability to stand up on two legs. There are many fascinating facts in this book and it's well worth reading by anyone interested in bears, though the reader should be aware before reading, that humans don't come out of this well and it's an uncomfortable read at times.

The book was originally written in German (and is beautifully translated) and to some extent focuses on the findings of German scientists and zoos, while giving a good overview of the relationship between humans and bears across the world.

This book sounds interesting--I've had a few encounters with bears in the woods--some scary like walking up on one in the dark, who stands up in front of me than then took, or being woken up by a bear sniffing around my bivy sack. The bear was looking for food. They are magnificent animals.

Hi Jeff, it must be awe inspiring to actually meet a bear in the woods...