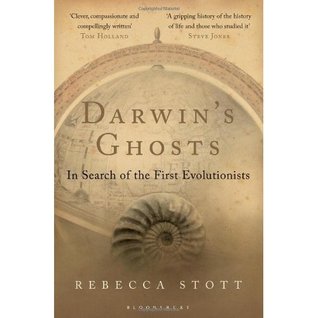 Soon after the publication of On the Origin of Species, Charles Darwin was accused of ignoring the work of those scientists who had before him come up with ideas that lead to his formulation of the theory of natural selection.

In this book, Rebecca Stott attempts to put this right by outlining the work of people going back as far as Aristotle.

It's a fascinating book,guiding the reader through the evolution of thinking about how life developed on earth. Aristotle's writings included the very first systematic studies of nature, studies which influenced thinkers throughout the ages. From then, Stott follows the lines of thought through the Persian philosopher Jahiz, thinkers of the Renaissance including Leonardo da Vinci, Charles Darwin's father Erasmus and lastly Alfred Wallace, who famously (though perhaps not famously enough) came up with the idea of evolution at about the same time as Darwin, though it was Darwin who published first and whose name will always be associated with evolution through natural selection.

Throughout the accounts of these scientists, lies the threat of religious persecution. All of these well educated and influential men (and they were all men, Stott recounts being sad that she could find no women to include) were reluctant to publish their thoughts under their own name.

Until we reach Alfred Wallace, none of these scientists were producing theories that actually look anything like evolution as we know think of it, but it is fascinating to read how ideas developed, how people's way of looking at the world evolved through time.

A good read for anyone interested in the history of science and ideas.

Darwin's Ghosts by Rebecca Stott, published by Bloomsbury (2012).
Crafted by Crafty Green Poet at 8:25 am

This does sound like a good read. I recently reviewed "The Guarded Gate," which is about US immigration policies in the late 19th and first half of the 20th Century, which sadly drew heavily on evolutionary theory, and shows how it was so misused.

Thanks Jeff, somehow I had previously missed that post on your blog so I've just hopped over now and left a comment. Excellent review of an important book.