The Secret Life of Cows by Rosamund Young 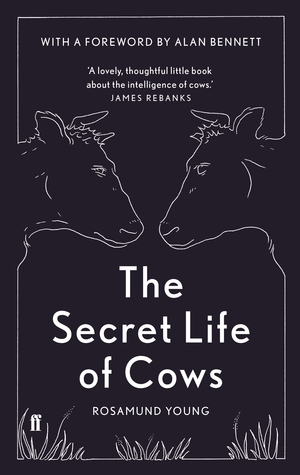 Rosamund Young owns and works Kites Nest Farm in Worcestershire, the organic cattle farm which she grew up on, where the cattle are allowed to wander and are treated as individuals.

This delightful book is full of stories of the way that cows make friends and help each other and of their very different personalities. Some cows are very independent of humans but will attract attention when they need help (some cows will hang around the farmhouse when they are about to give birth so that the humans will help them, others disappear off to have their calves alone or with the help of an older cow.) One cow liked to steal a hat, not hats plural, but the one hat worn by one farm worker and she stole it from him repeatedly. One cow enjoyed being groomed so much that she fell asleep during grooming. One cow has learned to open gates.


This is a beef farm so the cattle are being raised for food, but if animals are to be raised to be eaten this is how they should be raised - understood as individuals and enabled to live as natural a life as possible.

The cows aren't milked on a commercial level, but they are milked to produce milk for the household or if they produce too much milk for their calves. Each cow produces milk that is so different in taste that in the farmhouse they have jugs labelled with the name of the cow who produced the milk so that everyone can choose their favourite milk.

The book also includes the hens and sheep from the farm and a small section on the different feeding behaviours of the garden birds. It's a delightful, easy read that makes a strong case against factory farming.

It sounds a delightful book …