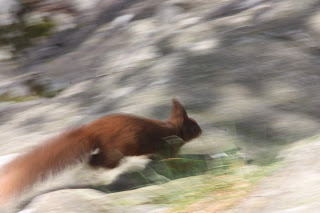 The first Earth Day on 22 April, 1970, activated 20 million people from across the USA and is widely credited with launching the modern environmental movement. Twenty years later, Earth Day became a global event, inspiring 200 million people to take part in over 190 countries.

As you may have read elsewhere, the world currently faces the greatest rate of extinction since dinosaurs died out over 60 million years ago. But unlike the end of the dinosaurs, today's rapid extinction rate is directly linked to human causes including climate change, deforestation and habitat loss, poaching and trafficking, unsustainable agriculture and pollution.

Each species of animal and plant is unique and plays a specific vital role. Different species depend on each other and if one goes extinct there can be detrimental effects throughout the ecosystem. For example in Asian countries where veterinary drugs have cause the population of several species of vultures to plummet, then animal carcasses are becoming health hazards.


There is still time to slow down the rate of extinctions. Many of our declining, threatened and endangered species can still recover if we work together. As part of this, the Earth Day Network wants people to join their Protect our Species campaign. The goals are to:

* Educate and raise awareness about the accelerating rate of extinction of millions of species and the causes and consequences of this phenomenon.

* Achieve major policy victories that protect broad groups of species as well as individual species and their habitats.

* Build and activate a global movement that embraces nature and its values.

* Encourage individual actions such as adopting plant based diet and ending pesticide and herbicide use.

You can find the Protect our Species resources here.

Earth Day is a broad campaign and behind every year's theme there is a drive to enable people to become more environmentally friendly and ecologically aware. You can find the Earth Day Top Tips here.
Crafted by Crafty Green Poet at 11:52 am


Enjoy your day and new week.