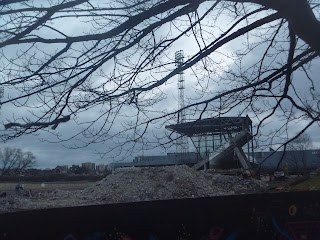 I've blogged several times before (most recently here) about the threat to the beautiful trees that surround Meadowbank Stadium. The stadium is being rebuilt and many of the trees on the site are slated to be removed to enable the development or in some cases to enable vehicle access to the work site.


Work began to remove the trees yesterday and continued today with several small trees in the site being bulldozed away.

Members of the Save Meadowbank Trees Group and the Edinburgh group of Extinction Rebellion gathered first thing this morning to protest the destruction of the trees.

Unfortunately I don't have any photos of the trees being bulldozed as at that stage I was taking video footage on a phone belonging to someone from Extinction Rebellion. However I did get a photo of the bulldozer when it was in the rubble of what used to be a world class sports stadium 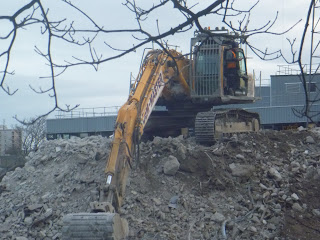 Edinburgh Council are asking people to contact them about what they want them to do with the wood from the trees. I emailed them to say the trees should remain where they are but if they must be destroyed then they should be made into benches which should be engraved with the words 'In Memorium of the beautiful trees of Meadowbank destroyed by City of Edinburgh Council'. If you want to let the council knowwhat you think about the destruction of the trees you can email them on meadowbankATedinburghDOTgovDOTuk.

Adverts for the new sports centre are pasted up on the hoardings round the site. I'm not convinced that they need (on any reckoning) to remove all the trees they are removing. I'm also not convinced by their 'promise' to lant more trees than they remove. I'll believe that when I see it and even if they do, the replacements will be young trees which will have a lower ecological value than the mature trees that are being removed and also no guarantee of how long the new trees will live. 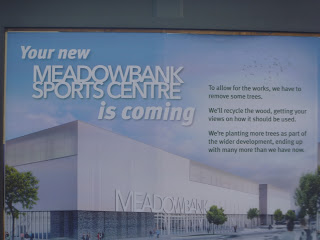 It was very upsetting to see the trees being bulldozed - specially knowing that this will only continue. If you want to get involved in protesting against this destruction please get in touch with Save Meadowbank Trees on Facebook or follow @MeadowbankTrees on Twitter.

So sad when beautiful old trees get cut down for some stadium or such.
Sounds exactly what goes on over here too.
Have a great Thursday
hugs
Carolyn