Last week I read on the Friends of the Hermitage of Braid and Blackford Hill Facebook Page that a very special guest had visited Blackford Pond. I hoped that this special guest would still be around today when I took my birdwatching class to the pond.

I walked round the pond before meeting the group to check whether our guest had arrived and indeed he had, though he was shyly sitting on the other side of the pond (he's the one on the right with a splash of orange on his back). 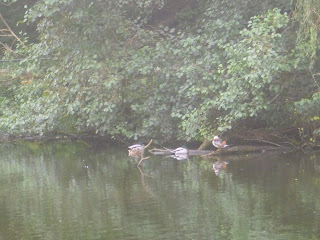 Everyone in the class got very excited wondering what the mystery guest would turn out to be...... When we came to this part of the pond, he had actually hidden himself away and all we could see were tantalising glimpses of him preening himself.....

We carried on our walk into the Hermitage of Braid including the wooded wetland garden and Midmar Paddock and then turned back and walked round the pond again. This time our guest had overcome his shyness and posed happily for the cameras 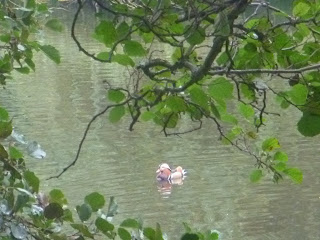 and even came closer and hung around us for a while 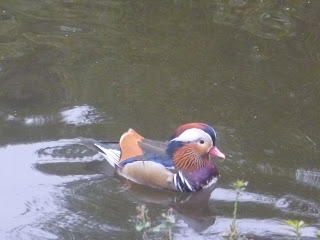 Mandarin ducks are native to the far east and were introduced to the UK as ornamental ducks on the ponds of large parks and stately homes. Some have escaped into the wild and there are breeding populations in the south of England. It's rare to see them in the wild in Scotland though.

A male mandarin, nicknamed Jerry, had been living on Figgate Pond earlier this year but recently disappeared and I suspect that this is the same duck. You can see my blog posts about the Figgate mandarin (with better photos) here and here.

**
Meanwhile, Daily Bunny today features my photo of one of the bunnies from the Corstorphine HIll warren in Edinburgh, snacking on the grass outside the hotel and just near the bus stop.

So beautiful, I know the mandarin duch but never met one in the wild. Nice captured in your pictures.

Wow! And I thought my wood duck was colorful! What a great fun find for your group!

I see lots of pictures of them on blogs, lots wild somewhere, but none round here ever!

You have no idea how lucky you are to have something like this near you... super jealous. - http://www.domesticgeekgirl.com

He is just glorious!

And lovely that your photo of the bunny was chosen.