The weather has been incredibly changeable today (currently it's pouring down!). This morning it was bright when I started my walk at Musselburgh. These lovely long tailed tits kept me compamy for a while (there were 7 of them altogether, just two in the photo, the one in the bottom left hand corner may be quite tricky to see). The photo shows them as silhouettes, but in reality they are mostly black and white and tinged with a lovely soft pink. They make a lovely churring sound as they flit through the branches. 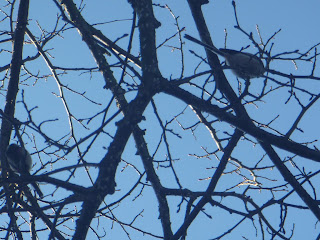 The rainbow was lovely behind the tree, with the sun shining on Portobello and Edinburgh in the background 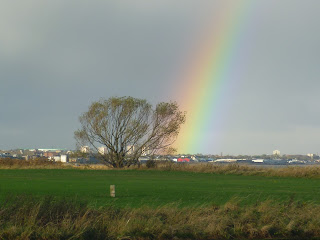 Soon after the rainbow appeared, the wind picked up and it started to rain. I carried on walking for a while and was rewarded with a wonderful view of a short eared owl, though my camera batteries had run out by that point and i doubt the owl would have stopped for a photo anyway. It's a good autumn for them at Musselburgh this year, apparently there are about ten of them here altogether, though I've only seen one at a time.

The rain didn't last long and the sun came out again, though the wind remained strong. But once i was on the bus to come home, it was raining again and hasn't stopped since. I think this either the tailed of Hurricane Abigail or the side swip of the tail of former Hurricane Kate. (The UK has only just started naming storms and I still haven't got used to the idea!)

Email ThisBlogThis!Share to TwitterShare to FacebookShare to Pinterest
Thinking about: autumn, birds, In and around Edinburgh

I've not been able to capture a long tailed tit yet, this is an objective for the next few days, especially if the wind has blown a lot of the leaves from the trees!

What a lovely rainbow. I think there is something special about seeing one.

Hope you have a good weekend.

Haven't seen a short eared owl for many years, for a year or two about ten years ago we had them round here regularly, they were quite tame and very beautiful on light summer evenings.

Been pouring here too! Salmon coming home to spawn in droves - good to see!

What a wonderful rainbow! Beautiful views.

Lovely rainbow! We have been naming our cyclones for years - used to be always male names, but now female names as well.