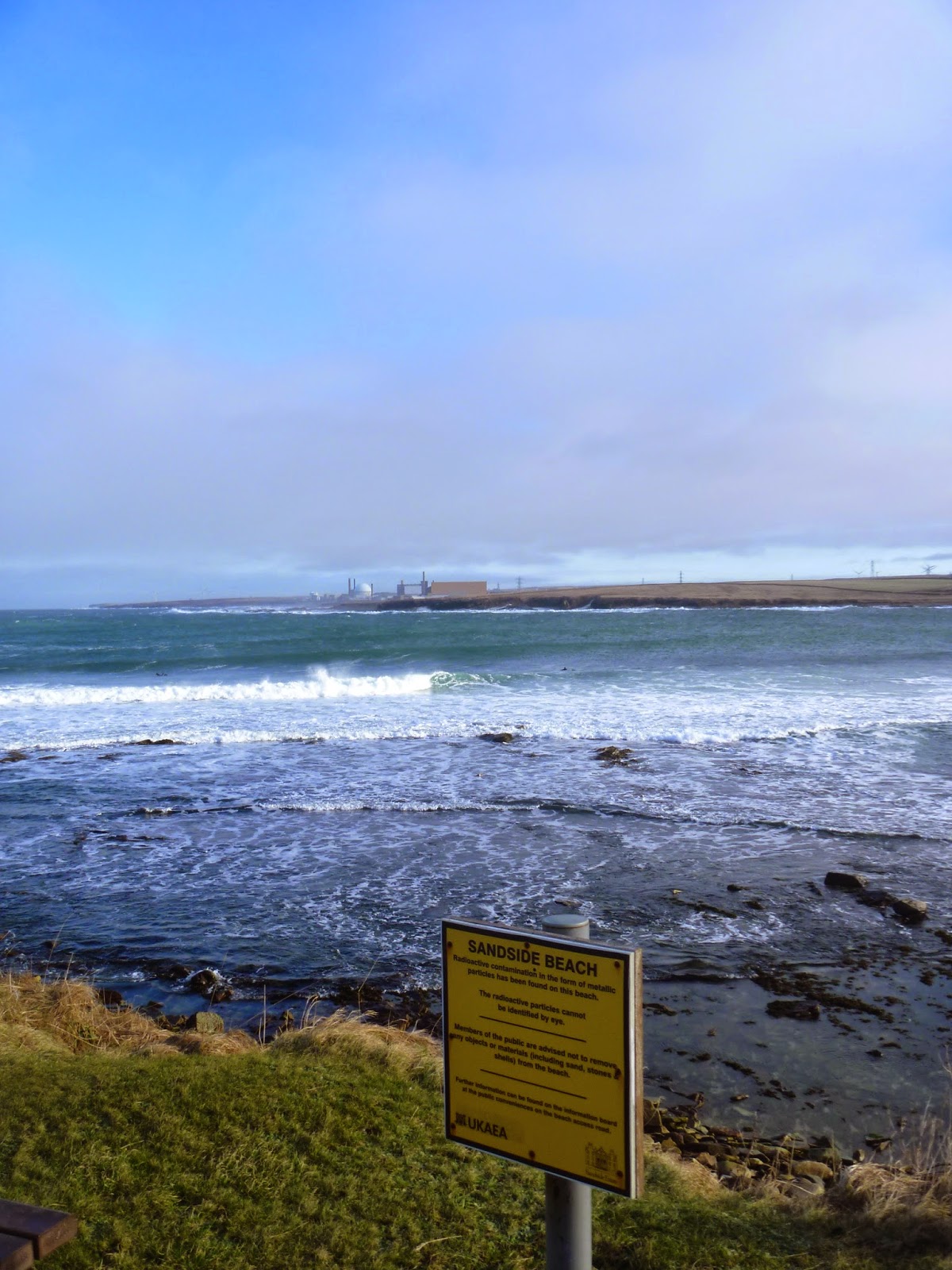 Sandside is an interesting little place on the north coast of Scotland. It has a pretty beach, which is obviously popular with surfers (there were around six people in the waves the day we visited). Yet it is near Dounreay, the nuclear power station, which you can see in the background of the photo above. (You can also make out a windfarm, obviously a cleaner, greener form of energy, but even wind turbines have their problems as I briefly discussed in the latter part of this post).The sign in the photo warns against picking anything from the beach, due to the likelihood of it being radioactive. But no warnings against surfing.....

The geology of this bay is beautiful 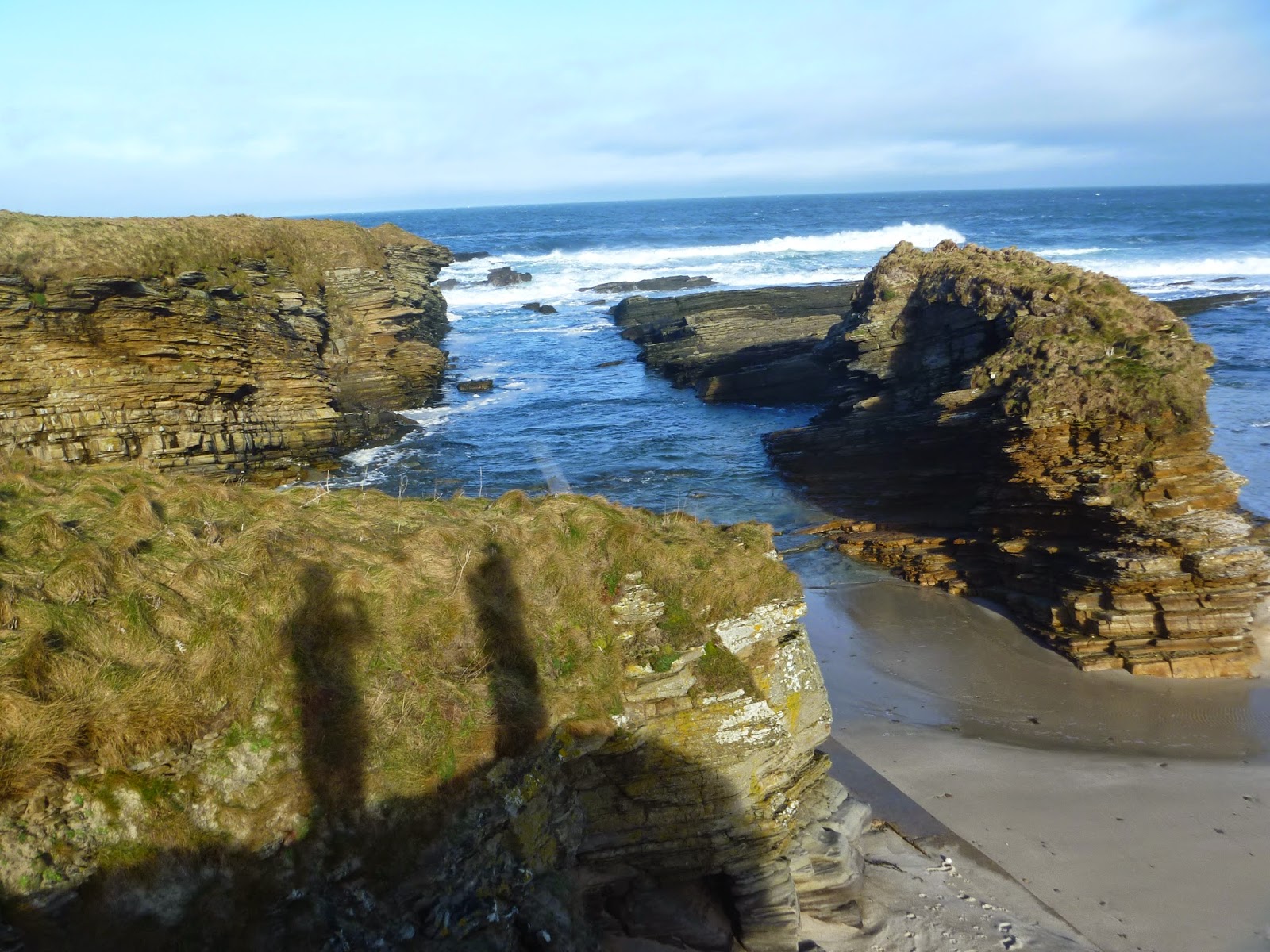 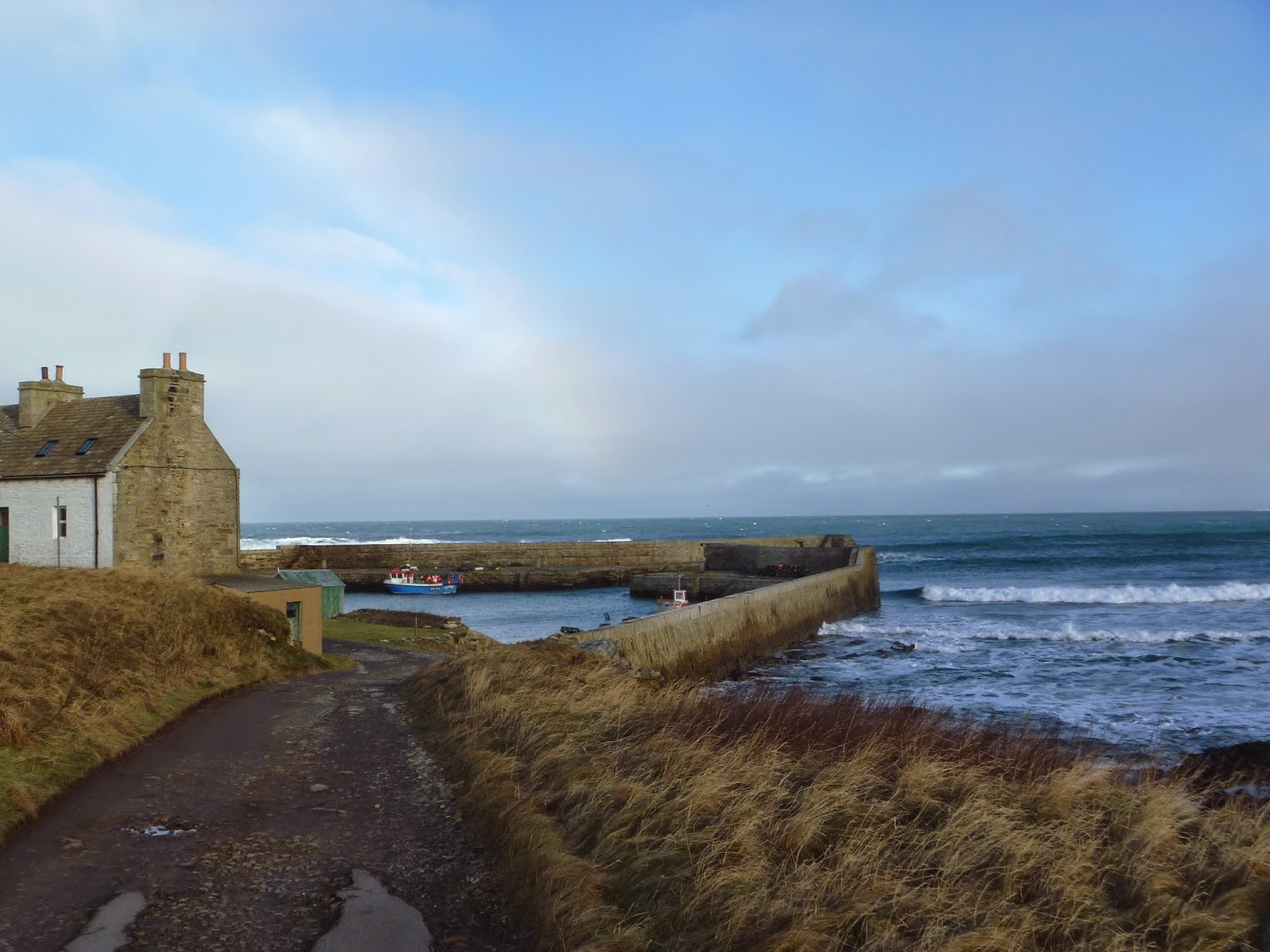 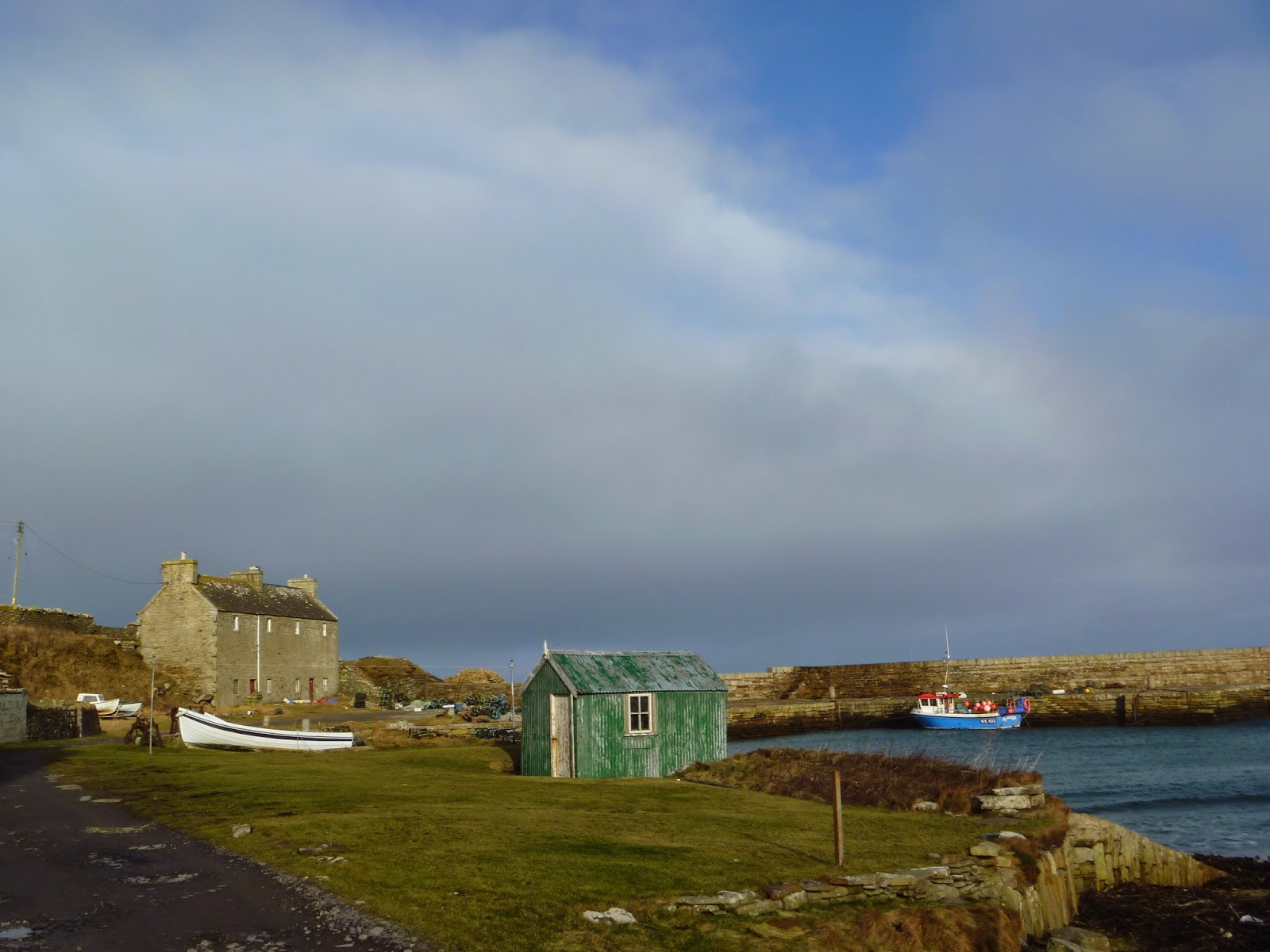 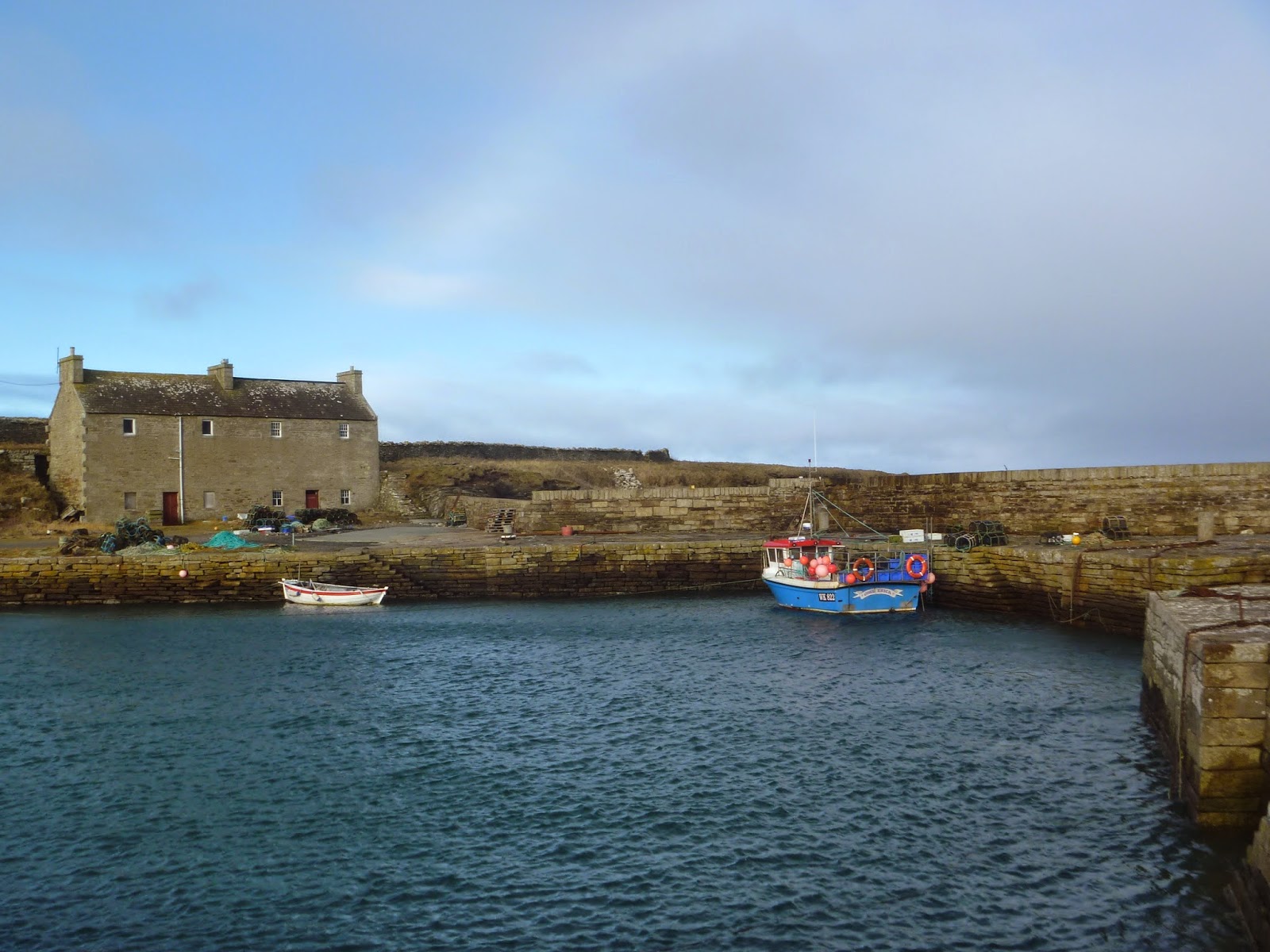 Not sure I'd want to eat the lobsters caught in these lobster pots, (even if I liked shellfish in the first place!) 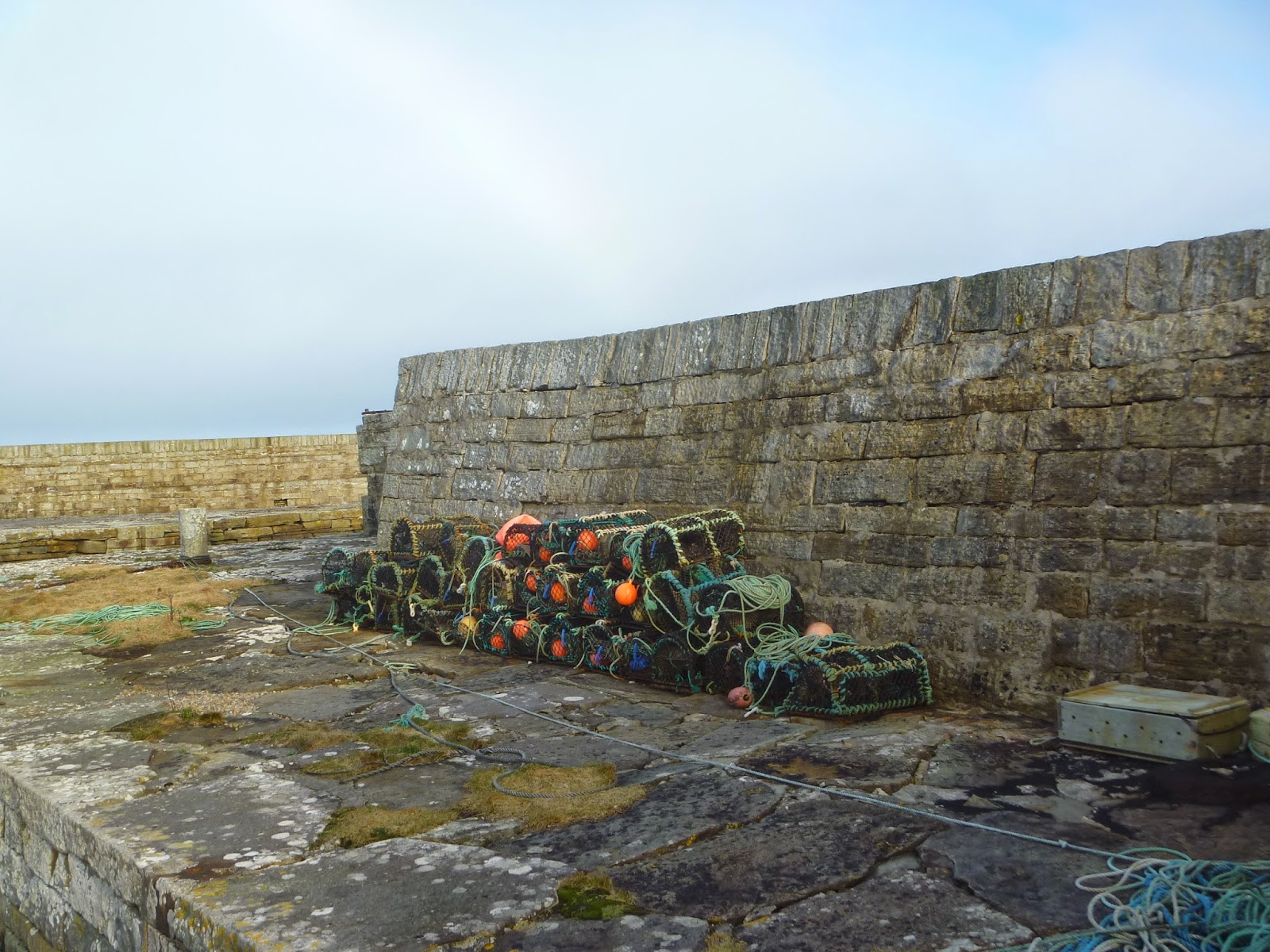 We were fascinated to find several song thrush anvils on the path. Song thrushes are the only bird in the UK that can smash a snail from its shell and it usually does this on a favourite anvil stone. I have never before seen so many anvil stones in one place and we wondered whether it was one very busy song thrush or whether there was a whole colony of song thrushes each with its own anvil in it's favoured part of the path. We didn't see any song thrushes on our walk but here's the remains of a few snails around an anvil stone 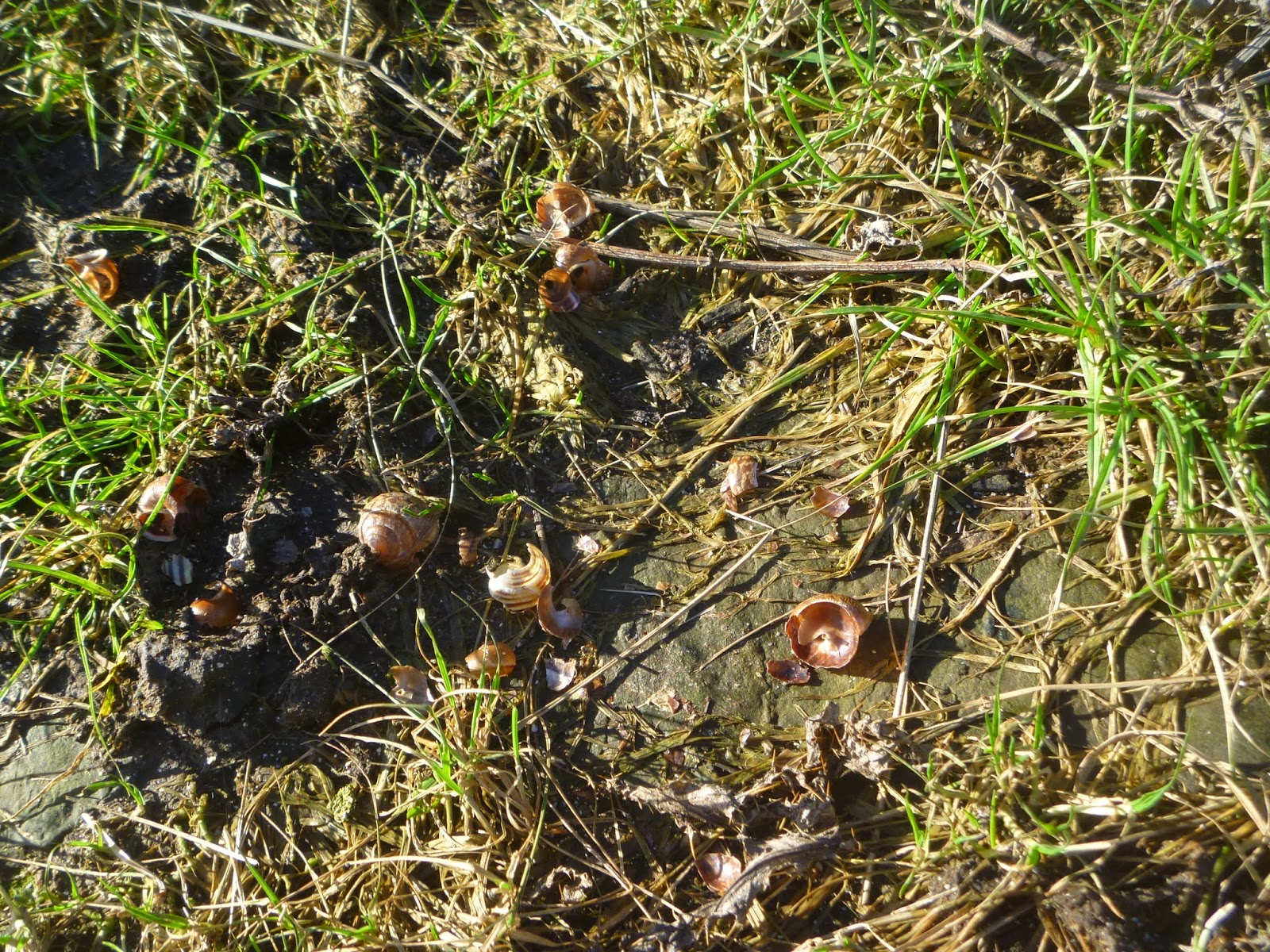 Obviously I wouldn't have picked sea glass or sea pottery from Sandside beach, but we saw almost no sea pottery or glass on any of the beaches on our trip. However, I've been updating the beach finds section of the Crafty Green Poet Etsy shop and will be adding more in the near future.

Email ThisBlogThis!Share to TwitterShare to FacebookShare to Pinterest
Thinking about: birds, photos, Scotland

Your pictures always make me want to be there!! Absolutely lovely my friend! - www.domesticgeekgirl.com

Seems ugly that you and surf and eat lobsters but not pick up sea shells, as if the regulators aren't thinking things through enough or trying to protect the local economy at the expense of health. I wonder how much radioactivity there really is in the area.
Lovely photos and location though. I'd go, radioactivity notwithstanding. Thanks for the armchair travels.

sarala - I certainly feel that the local rules haven't been thought through properly.

Love your reflections on the rocks.

What a lovely windswept place, but for the power station.

Minsmere is near Sizewell, and I always feel people seem strangely relaxed about the fact. I wonder if the situation is the same, with regard to radiation. I know you don't want it close to larger centres, but it's so sad that beautiful wild places are targeted instead. I have no answers beyond the importance of thinking seriously about greener measures ...

Fascinating info about the song thrushes! Your nature walks are like mini-mysteries where you interpret the clues to arrive at theories of what happened. I love mysteries and the process of solving them. :)

The weathered green building appeals to me too.

Into every life a little radioactivity must fall?

What a lovely place!

Beautiful images. It's hard to think of north Scotland as a surfer's place but I guess you could say the same of some other places in the UK. Great post. Thanks.