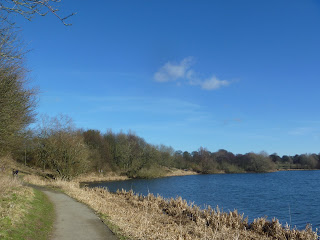 It was a lovely spring day for our trip to Linlithgow Loch today. 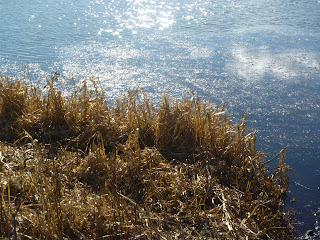 We particularly wanted to see the great crested grebes and we weren't disappointed.

Last year we were slightly too early in our February visit to Linlithgow Loch. Although we saw a lot of great crested grebes, they weren't quite fully committed to their courtship dances and we didn't get to see the full display. So this year we left it a bit later and today, though there were fewer grebes, we did get to see the full dance. (We found out that last year there were more grebes than ever on the loch and this year is looking like a good year too). Here the pair face each other and shake their heads. 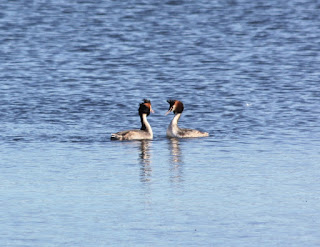 Then the male picks some weed as a special gift for the female: 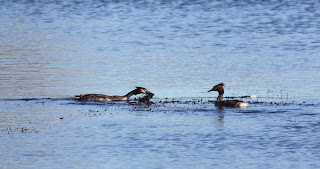 they then swim together at top speed for a little while (which we didn't capture on film).

It was wonderful to watch these birds! We also saw pairs fighting each other as they tried to defend their territories, which became quite exciting at one point, but difficult to capture on film!

Email ThisBlogThis!Share to TwitterShare to FacebookShare to Pinterest
Thinking about: birds, In and around Edinburgh, nature diary, Spring

Marvellous birds, I do not think the species exists here in the Venetian lagoon area. Although, among cormorants and seagulls, egrets, herons and some occasional kingfisher and swan ( two swans even mysteriously appeared once in winter at the seaside) I have often spotted from the train window, on the lagoon stretch from the mainland to Venice some acquatic birds similar to those of your photos,although smaller than yours... their name "svassi" in Italian I once knew in English but, my age advancing, I have now forgotten it and can't find it in the dictionary. They are two kinds, major and minor "Svasso".

Optimistic - thanks, it was!

Tommaso - there are several species of grebes, the one in my blog post is the largest of the British (and as far as I know of all European) grebes.

Looks like you had a wonderful day out and I enjoyed seeing your lovely photos.

Your grebes are very like the ones found in New Zealand
http://www.nzbirds.com/birds/australasiancrestgrebe.html
That surprised me, often birds here with the same name as English birds are not the same at all. The early settlers used to attach the name of the closest European equivalent to the new birds, for instance our magpies are not much like English magpies apart from being black and white. Our kingfishers are different too, although they have the same general body shape.

What a fun time that must have been to actually see that ritual.

I love these pretty grebes. Beautiful scenes and great shots. Have a happy day and week ahead.

how wonderful
to have such a name –
great crested grebe

How wonderful that you got to see the grebes. Around here the little pied-billed grebes are the only ones I ever see.

what a great day it looked to be and to see the grebes mating sounds awesome. i'm sure the fighting was quite lively too... hope all is well~