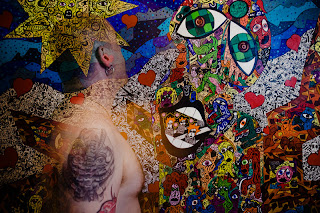 Some readers of this blog may remember that I reviewed the Edinburgh International Film Festival this summer. One of the highlights of the festival for me was Calvet, a moving biopic of an amazing artist, Jean Marc Calvet. I'm delighted to hear that Calvet is now being released at selected cinemas across the UK, starting with the Cameo in Edinburgh, at 18.40, Thursday 24 November. You can see the full listing of screenings here. Here is the review I posted back in June: Jean Marc Calvet is a self taught French artist, currently living in Nicaragua. Calvet is a biopic of his amazing lifestory. The film is basically an extended interview with Calvet, interspersed with scenes from the places he has lived, views of his amazing artworks and abstract, impressionistic interludes. Calvet was born in Nice, France, in 1965. He had a hard childhood and an early career as a bodyguard to the stars, a French Legionnaire and a vice cop. He then abandoned his partner and young son to take a shady job in the USA, which led to him absconding to Central America with huge amounts of cash he had stolen from his employer. He hid out in Costa Rica and at one point hid in his house on a coke binge that lasted months. The film gives a brilliant and disturbing recreation of the hallucinatory paranoia he was experiencing at this time. During a particular hallucination he literally found some paint and started throwing it around the house. He realised that this formed a sort of emotional release and he started to paint on a regular basis. At this point he was seeing it as purely a therapy, it was months or years before he began to see himself as an artist. When he had overcome his problems and moved to Nicaragua, Calvet decided to search for his son. I found this part of the film a bit tedious, involving as it did a lot of getting lost in little streets and asking the neighbours if they knew Calvet's family. However, tedious is probably how it felt in reality at times and there is an emotionally satisfying conclusion to Calvet's attempt to reconcile with his first family. Calvet is now married with a daughter and he is a successful and prolific artist. You can find out more about Calvet the film here.  As ever, text in red contains hyperlinks which take you to other webpages where you can find out more.
Crafted by Crafty Green Poet at 6:33 pm

Sounds very interesting. Will have to check out more.
xx

Fascinating story. He is an interesting study. Thanks for sharing this.

Must make a date to tune in to More4 for the December TV broadcast.

My mouth is watering already in anticipation. I shall follow up on this. Thank you.

will look up his art..maybe the movie will come to the States someday

Thanks for the information. I will have to check this out.

I interviewed Jean-Marc at Sheffield's Doc Fest, and also got to see him paint, which was incredible!