Birds on a Blustery Day 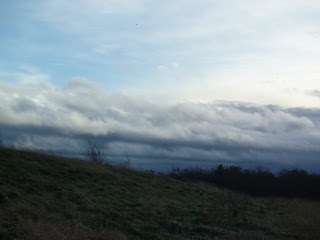 I had heard via Edinburgh Wildlife (@wildedinburgh on Twitter) that there were snow buntings and long tailed ducks around Musselburgh recently, and though I don't agree with twitching (travelling long distances to see rare birds) I did think that jumping on the 44 bus which runs directly from our flat to Musselburgh to see two birds i've never seen before was okay.

Anyway Crafty Green Boyfriend and I hopped on said bus and travelled to a very blustery, windswept Musselburgh. We walked along the River Esk, where we saw this lone pink footed goose, (in exactly the same spot it had been in last time I was in Musselburgh with my birdwatching class, when I had used it as a compare and contrast exercise with the superficially similar greylag geese that are found on the river in much greater numbers). 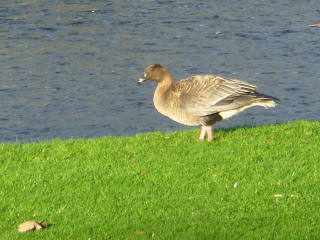 There were also alot of Canada geese on the river. Plus a few redshanks and five turnstones. We then walked along part of the John Muir Way along the coast. The wind was wild and the waves were high. I could scarcely keep my binoculars to my eyes it was so windy, so there may have been long tailed ducks hiding in the waves, that I just didn't see. We did however see eiders and goldeneyes on the sea.

We then visited Musselburgh Lagoons where we sat in the bird hides (and particularly uncomfortable bird hides they are too, all concrete seats and no roofs!). The views were magnificent though. There were large numbers of waders (oystercatchers, curlew, bar tailed godwits, knots and dunlin). There were also good numbers of two pretty species of duck - teal and wigeon. Then one lonely lapwing. Crafty Green Boyfriend took several photos of the birds on the lagoons, but they were too far away to come out well enough to share here (much better to follow the links in the text and find out what the birds look like from the RSPB website!)

The walk back into Musselburgh was even more blustery than the walk out had been! But even though we didn't see the birds we had hoped to see, we were very happy with those we did see!

As ever, text in red contains hyperlinks that take you to other websites where you can find out more.
Crafted by Crafty Green Poet at 6:07 pm

Gorgeous. I love watching the birds.

What an amazing number of different birds for one afternoon out. Well worth a bus ride!

Must be so neat to take a trip on the bus and see all the wonderful birds.
Such a lovely outing.

Ilove the word blustery ;) that would be what I call Winnie the Pooh weather.

Always the best way to be with birdwatching Juliet.

It was very windy here last night - but I am afraid that I have been confined to barracks today, feeling very sleepy after a late night, so can't tell you what was flying around this part of the world!