I'm continuing my wildlife surveys of all the council managed cemeteries in Edinburgh. I'm now making summer surveys of selected cemeteries that are particularly good for wildlife. Today I revisited Morningside Cemetery, which was, when I arrived looking rather magnificent after #NoMowMay, a project which has encouraged people to not mow grass as a way of allowing nature to thrive. 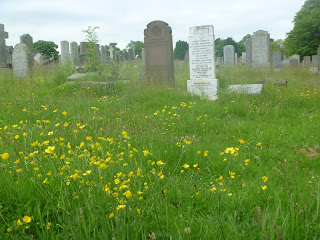 Of course, there is a balance to be struck between allowing nature to thrive and allowing people to view the graves, particularly in cemeteries with recent burials. In fact the council mowing team arrived at the cemetery before I left, but the mowing regime is more relaxed than it used to be. Part of the purpose of my wildlife surveys is to find a way to manage the cemeteries that encourages wildlife while also respecting the people who are buried there. Which can be a very tricky balance, some people are adamant that anything other than a sterile lawn disrespects the dead.

Morningside Cemetery is a good place for wildlife. The grass here is rich with flowers, many of which will grow back quite quickly after mowing. The Selfheal is starting to look beautiful just now (and is likely growing so low that it will escape the mower, which is set at a higher cut than it used to be) 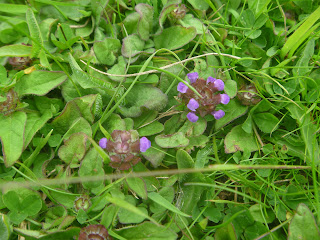 and lesser stitchwort is well worth a close look 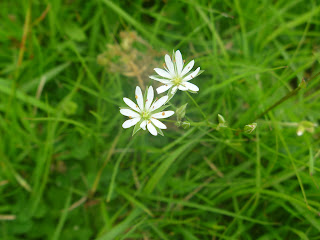 and there are some pretty carpets of Germander Speedwell 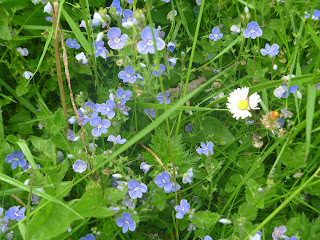 I'm going to submit my records of all the meadow plants I found in the cemetery to Big Meadow Search, which runs until the end of August.  The Big Meadow Search is a UK wide project raising awareness and interest in grasslands and encouraging people to record plant species. You can get involved by undertaking plant searches on grassland near you.

Meanwhile the horse chestnut flowers are already starting to turn into conkers! 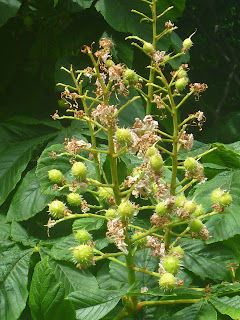 There weren't a lot of pollinating insects around, as it was relatively cool and cloudy while I was doing my survey. However this Banded Hoverfly (Syrphus sp) showed up 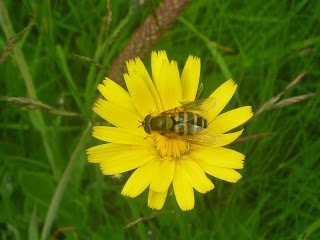 I also found a patch of flowers that was later buzzing with a number of bumblebees (mostly Buff Tailed Bumblebees and Common Carders) which I watched for a while, though no photos as they were all moving so fast!

Around 50 starlings were in the cemetery! They flew around between the trees and shrubs and spent time looking for food in the grass. I enjoyed watching this parent and young fledgling, which inspired today's entry for the International Nature Journaling Week. 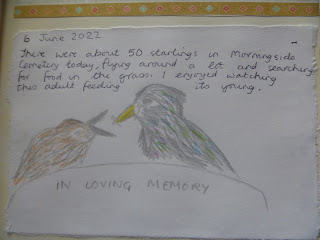 Email ThisBlogThis!Share to TwitterShare to FacebookShare to Pinterest
Thinking about: 30DaysWild, art journals, birds, In and around Edinburgh, nature diary, photos

This is a lovely project.
I did a post about lawns. We are attempting to recreate European vast expanses, and it doesn't really work for the critters.
We've a local family arguing with their town about having a natural front garden. We do live with old fashioned notions!